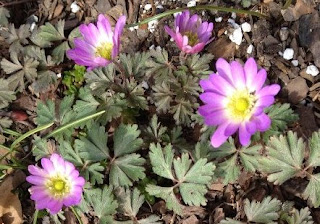 We are garden fairies and once again, we have arrived just in time to save this blog from sure and certain oblivion.  If it were not for us garden fairies, Carol would have posted some absolute drivel on here.

We think this evening she was going to post about how "garden" is both a noun and a verb and so is "weed".  Earth-shattering news here folks. Yawn.

And guess what? She likes "garden" as a noun and a verb but she doesn't like "weed".

Really. We are garden fairies and it is hard to tell sometimes that Carol does not like weeds, as much as she lets them grow around here.  What we think is that she doesn't really like the verb weed.  Who does?  But she needs to get over that, and soon, or we garden fairies will never find our way out of the henbit to the rest of the garden.

Fortunately, the weed situation around here is not nearly as dire as it was last spring when Carol's sister came and weeded.  In fact, it isn't that dire at all.  We are garden fairies, we would tell everyone if it was. If it was that weedy around here, we would send out an S.O.G. (Save our Garden) alert faster than a rabbit can eat through a row of peas.

Did we say something about a rabbit eating through a row of peas? Why yes, we did. We've seen it happen and it is frightening. Carol's peas are coming up now so she'd better get some row cover to protect those little sprouts.  Did we say sprouts? Hey, that's another garden-y word that is both a noun and a verb. Sprouts sprout, right? We are garden fairies, we find these dual use garden words fascinating.

Hmmm... maybe words that are nouns and verbs isn't such a bad idea for a blog post, after all, especially since Carol forgot to take pictures today, so we can't show every one the new tulips that have sprouted up in the garden to show what a pretty plant they are in bloom and flower, growing in the soil amidst the weeds, where they might seed themselves if given half a chance.

Did we use all our dual-use gardeny words?  We are garden fairies, we hope so!

Submitted by Violet Greenpea Maydreams, Keeper of the Dictionary at May Dreams Gardens