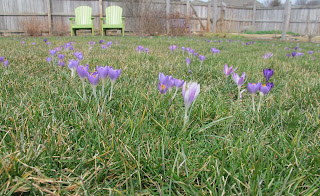 I watched. I waited. I held my breath. I hoped.  I prayed. I planned for crocuses to be blooming in the lawn on Easter.  I planned for sunshine and warm-enough-to-be-outside temperatures.

And lo and behold, there were crocuses blooming in the lawn for Easter and it was sunny and around 60F when we started the big egg hunt.

I love it when a plan for the garden works out just like I planned it would.

The crocuses even helped hide one of the eggs. 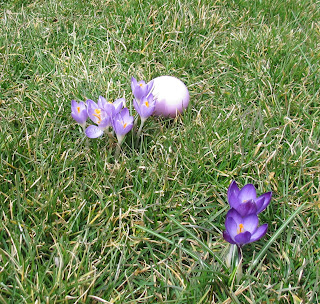 No kidding, this was one of the last eggs found, and then it was only found because I stood next to it and motioned to one of the hunters so she would see it. 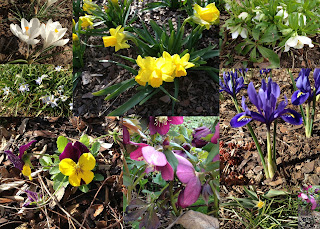 Now it's time to plan for next Easter, which will take place on April 20, 2014, three weeks later than this Easter. In garden-time, that means a whole new set of blooms for the big egg hunt.


I'm going to go through my gardening journals for the last few years, both online and on paper, and figure out what should be blooming in my garden around mid-April.  There won't be crocuses in the lawn by then - they'll be all bloomed out - but there should be more trees and shrubs in bloom, along with tulips and daffodils.

I'm also going to study the bulb catalogs and websites to pick out more bulbs that should bloom mid to late April and order them to plant in the fall.

And of course, I'm going to watch and see what is blooming in my garden in three weeks.


I love it when a plan for the garden works out just like I planned, and hope that next Easter turns out to be as nice as, if not better, than this Easter was in the garden.
bulbs holidays lawn