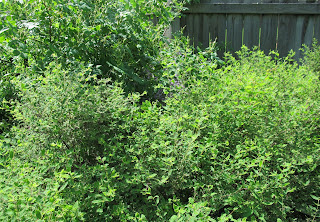 Baptisia australis, which has the common name of Blue False Indigo, is a native flower in the eastern United States.  Well-planted in the garden, it can provide a stunning display of purple blooms in mid to late spring.

Here in my garden, Baptisia is not well planted.

Can you find it in the picture above?

Let's go in a little closer, shall we? 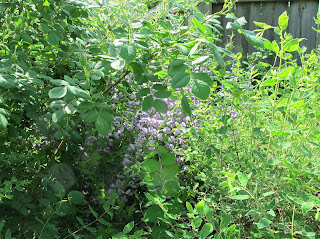 And there it is, surrounded on the left by Aunt Marjorie's pink climbing rose  and on the right by Symphricarpos orbiculatus ‘Taff’s Silver Edge’.

Aunt Marjorie's rose is an old wild rose she gave me a start of fifteen years ago. It has pink blooms for a few weeks and then just lurks in that area of the garden, occasionally snagging me if I venture in to clear out some of the thicket it has become.

The Symphricarpos orbiculatus ‘Taff’s Silver Edge’, also known as Variegated Coralberry, is also a native plant, one chosen for its variegated foliage.  It spreads itself with running stems and at least in my garden, is forming quite a thicket.  I suppose one could keep it in check by watching for those stems, or one could let it become a thicket as I've done.

Elsewhere in the garden, another Baptisia is growing near a native tree, a serviceberry, Amelanchier sp., in the garden border called Plopper's Field 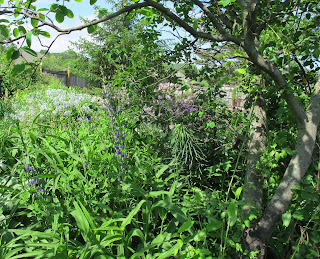 This one is also not well placed, by that sometimes happen in a garden where you just plop plants in here and there.

I do have another Baptisia in another section of Plopper's Field. 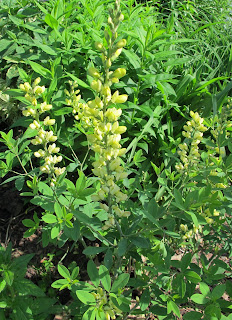 This is Baptisia 'Carolina Moonlight'.  It's a hybrid, so strictly speaking probably shouldn't be in a post about wildflowers. Infiltrator!  In my garden, this hybrid grows much slower than the species Baptisia.

People may wonder why I don't get out my shovel and dig up my hidden Baptisia or clear out the other plants around them.  I have heard, though I haven't dug one up to see for myself, that Baptisia have a long tap root, so they aren't so easy to transplant.

Knowing that, I did what any gardener would do.  Absolutely, I bought another Baptisia australis to plant in my garden, way over on the other side near August Dreams Gardens.  That border is supposed to be mostly plants that bloom in late summer, but I think I can sneak a Baptisia in there somewhere, maybe along the edge, and it will provide some spring blooms. In the fall it will have interesting seed pods that will play nicely with the late blooms of the other flowers.


This post is my addition to the garden bloggers' meme called Wildflower Wednesday, which takes place on the fourth Wednesday of the month.  Please visit our hostess, Gail of Clay and Limestone, for more posts about wildflowers in the garden.