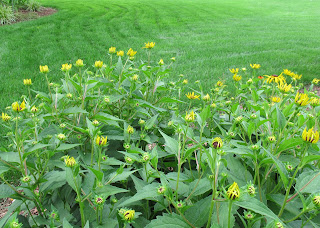 We are garden fairies and we are once again compelled to post on this blog about what is happening here around May Dreams Gardens.

Well, what is or was happening was that Carol left the garden for ten days and we garden fairies had the place almost to ourselves.   And certain garden fairies, namely the lawn fairies, had their way with the garden, and the lawn.

It was so nice and pleasant around here while Carol was gone, kind of cool and kind of rainy. The lawn especially loved it and just grew and grew and grew.  Oh, sure, Carol cut it really short before she left but you could not tell that she had ever cut it after ten days of no mowing when the weather was so cool and rainy.  The lawn fairies, as we noted, had a hay day.  Not because you could have cut the lawn for hay after 10 days of no mowing, though you maybe could have it was so tall, but because they like to play in tall grass.

Those lawn fairies behaved like teenagers whose parents left town and left them in charge. Oh, my, goodness, the parties and all that went on. Legendary. The two ring leaders were the lawn fairy twins, Rye Poarunner and Fescue Poarunner.  They had the best time...

Then, party's over. We garden fairies believe that Carol set two lawn mowing records in the last 24 hours. At least, Ol' Tangle Rainbowfly, who pretty much remembers everything that goes on around here, thinks they were records.

First, Carol set a speed record for the time it took her to park the car in the garage, go inside and change into mowing clothes, and then come back out and start mowing. We garden fairies think it was less than five minutes. I know it sure did set the Poarunner twins to scrambling to clear out before they got mowed over.

Then, for her second record, she mowed the lawn again less than 24 hours later. It seems that she mowed the first time on the highest setting of the mower, which she calls the emergency setting because it is used only in emergencies when the grass has gotten too tall to mow at the normal setting. Like yesterday. Then she came back after a mere 18 hours and mowed the lawn again on the normal setting which is one notch below the emergency setting.

We are garden fairies and we have heard Carol advise people that this is the way to go with mowing.

Now that the lawn has been cut twice in less than 24 hours, we garden fairies do have to admit it looks nice.  The picture above is after the first mowing.

We garden fairies also cannot believe how green the lawn is for July.  We went through Carol's pictures and found this one from last July, 51 weeks ago. 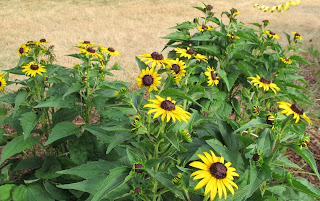 See how brown the lawn was at this time last year?

We are garden fairies and we like it better this year with all the rain.  Everyone does. Especially Rye and Fescue Poarunner.