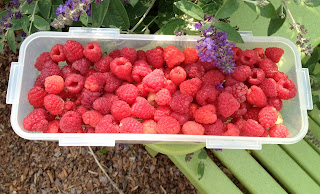 They came to me in the early spring of 2012, three sticks with a few roots attached at one end.

I planted them in an area where I had previously planted some shrubs on the edge of the Vegetable Garden Cathedral.

Who wants shrubs on the edge of a vegetable garden? I decided I didn't. I decided the edge of the garden is a good place for fruits and berries.

I watered my raspberry sticks, and they began to grow and I began to think of all the berries I would be eating. Even though raspberries fruit on second year canes, these raspberries, a variety call 'Caroline', were everbearing. I was hopeful that I would have some berries to pick in the later half of the growing season.

Whew, I am getting long-winded here. If I don't get on with it, the garden fairies will take over. Let me conclude.

The raspberries struggled through the drought of '12 and produced a handful of berries toward the end of the season. They looked pretty bad in the fall. In the spring, I cut back all the canes that had produced fruit, leaving just a few stragglers. By mid summer, my raspberries where tall and lush and growing with abandon. I did not get any early fruiting but now I am reaping a harvest like none before.

I will, and gladly.