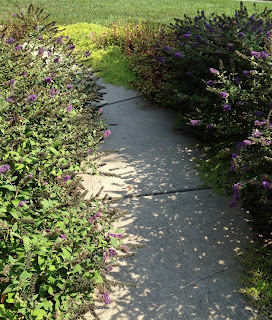 We are garden fairies and we think that Carol is just using us to tell about what's really going her at May Dreams Gardens when what's going on involves her and something she has gone and done and she won't tell about it.

We are collecting evidence now to see if this is the case, but we really do believe that is what is going on.

However, that is not going to stop us from telling about what happened today in the garden when our own Buzz Honeycrisp, a well known bee whisperer amongst us garden fairies, rescued a bee right here in this garden.

This means, of course, that when they are in full bloom, like they are now, they are covered with bees and butterflies and other pollinators and many of these pollinators, especially the bees, do not appreciate when people walk up and down the front walk disturbing them, like Carol seems to do. Geez, can't she just go one place and stay there?

Well, we are garden fairies and the few of us that were around today when she was doing this noticed that at one point one of the bees seemed to have had enough of Carol's nonsense and followed her down to the street.

We are garden fairies and we saw Carol try to wave the bee away but it came back so she waved again and it came back a second time. Well next thing we know, we thought Carol was going to swat the bee and we were going to having another stinging situation on our hands like that time when she tried to destroy a nest of German Yellow Jacket which resulted in the German Yellow Jacket Stinging Incident of 2007.

Then there was the other time when Carol was mowing and  she actually was stung by a European Paper Wasp.  She thought that was unfair, as we recall, because she had done nothing to provoke the wasps, except mow near their nest or hive or whatever you call that place where they all go and lay eggs and multiply.

Well, we are garden fairies and we were determined that there would not be a stinging incident today, so we sent Sweetpea Morningdew to go wake up Buzz Honeycrisp so he could talk the bee out of stinging Carol.

Buzz was not too pleased to be awakened mid-day like that, but he did his duty and went and whispered to the bee and got it to calm down and leave Carol alone. By the time he did this, she had already moved away from the butterfly bushes anyway, so who knows if we really needed Buzz. But it was good to have him help, regardless, and it probably saved that bee's life because Carol looked like she was swatting to kill.

However, we thought you should know why Carol was waving her arms around while mowing, in case anyone happened to see such a thing.