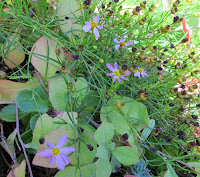 Today started out a bit overcast and cool.  Perfectly ordinary.  When I got up in the morning, I looked out about the garden and was pleased by how well it seemed to have responded to the rain from just a few days ago.

I decided as the clouds moved on and the sun came out that this should be a gardening day.  The garden was calling "weed me, weed me" and the birds sang it back to me in unison "weed it, weed it".

I'll weed in due time, I thought. I'll put off weeding, and mowing, until tomorrow and instead work on the house plants, freshen them up a bit for the winter.   Yes, that's what I would do.

I took a little inventory around the sunroom and saw that more than a few houseplants had outgrown their containers. They looked like school kids in the fall trying to cram themselves into clothes they had just worn a few months earlier. How could they, and the plants, have grown so much?

Just outside the back door, I had a stash of containers and thought there was one there that I could use to "up pot" a particularly crowded-out plant.  I stepped out the door to look for the container.

Now, at this point, you might expect that I am going to say that I reached down for the container and noticed a bit of paper sticking out from under it. You are probably anticipating that when I pulled on the paper, I realized it was an entire book, a diary of some sort.

No, that's not how I discovered the garden fairy's diary.   Close.  I didn't actually find it under a container.   I actually found it because someone had left it out in the open where anyone would find it.  I didn't see it at first, of course, because it had a dark green cover on it and blended in with the grass.

But then I literally tripped over it while walking across the lawn.

A garden fairy's diary. I never knew that such a diary existed.

After I found it, I spent quite a bit of time reading it, looking for clues as to whose diary it was.  I found the clue I was looking for right inside the front cover.  There on the right hand page, someone had written "This garden diary belongs to Violet Greenpea MayDreams. All others keep out."

By "all others", I assumed Violet met "all other garden fairies".  Who wouldn't assume that?  So I did not keep out and began to read, "Dear Diary..."

What I read after that was shocking, and illuminating, all at the same time.  In the very first entry, Violet revealed...