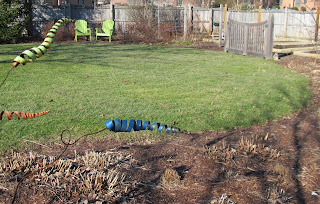 The ol' rabbit, Thirteen, gazed cross the garden, taking one last look before his time was over.

"I sure am leaving the garden quite green", he said out loud, in case there was any one there who could hear him.

"I remember when I arrived and took over for Twelve, this place was snow covered from a blizzard that ol' Twelve threw down before he left for good.

Thirteen began to reflect back, taking pride in how many crocuses bloomed in the lawn over the Easter weekend. "Even though spring was early, I managed to make it colorful with blooms. I sure hope Fourteen appreciates all the extra bulbs I planted to be sure his Easter is just as good if not better than mine."

When he mentioned Fourteen, he looked toward the gate to see if he could see any signs of him coming.

"I guess it is still early.  I hope Fourteen also appreciates how cleaned up the garden is right now. Why last year, when I got it, it was a just a mess, recovering from that drought that Twelve brought. At least I did better with rainfall. Well, except for August.  I sort of messed up August and made it a bit too dry.  I'll be sure and tell Fourteen not to do that."

"I'll also warn Fourteen that Carol leaves the garden sometimes and then he'll have to take extra care of it.  She left me twice. Once to go on vacation to the ocean and once to go to Quebec City for the GWA symposium.  I wonder where she plans to go next year?"

"I also need to talk to Fourteen about the vegetable garden, and some roses that need to be cut back, and about the new gardening book library that isn't quite filled up.  Oh my, not much time to put my notes together."

Just then, as Thirteen was about to look for paper and a pencil to makes some notes, the garden gate flung open and there was the new bunny, Fourteen, all energetic and exuberant and excited.

"Welcome and goodness gracious, Fourteen. Settle it down. You've got 365 days to go, save a bit of that, that, that, whatever it is.  You'll need it later. And as for notes, well, I didn't get many when I arrived a year ago and I did fine, so I'm sure you'll do just as well without my notes. Just remember, this place is full of garden fairies, tree fairies, and toast fairies, along with pillywiggins and who knows what else, so be careful and watch where your step."

With that final bit of wisdom, Thirteen gave Fourteen a big slap on the back, wished him well, and headed out the gate to the past.  Just as he was almost out of sight, he turned back and offered one more thought, "Happy New Year, Fourteen. Please take care of Carol's garden. She wants this to be its best year yet."

And then Thirteen was gone, and Fourteen was in charge.
holidays humor rabbits