Lily of the Valley for Christmas 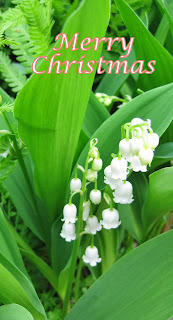 On the surface, the story appears to be that I happened to see some pre-cooled Lily of the Valley pips for sale and decided to order them and give them a try.

But actually the story of how I came to this point of planting Lily of the Valley pips a few weeks before Christmas so they will bloom for the holidays starts way back many decades ago when I was a little girl.

Every Sunday when I was growing up, we drove from our house in the suburbs to my grandma's house on the near East side of Indianapolis for an afternoon visit.  Visits in the spring were especially exciting because when the Lily of the Valley were in bloom, we were allowed to go out and pick them, as many as we could hold in our hands.

We'd give our bouquets as gifts to Grandma and my mom who graciously accepted them from us and remarked, always, how pretty they were. Often we picked violets, too.  Grandma would put them in little vases and row them up on her china buffet.

I think that Lily of the Valley is the first flower that I really knew by name and could identify when I saw it, along with violets.

I've always had at least a small patch of Lily of the Valley growing in my garden through the years.  Here in my current garden, my little patch has become a bit sparser lately as I dug up borders and beds where they grew for various and sundry reasons.  That's one of the reasons I used to rationalize my purchase of pre-cooled Lily of the Valley pips. After they bloom, I can grow them on and plant them in the garden in the spring.

I received my Lily of the Valley pips yesterday and potted them up last night.  I look forward to seeing the leaves and then the blooms in a few weeks.

Smelling the blooms of Lily of the Valley in the wintertime will remind me of my grandmother and my mom, of warm spring days, of times long past.  I won't think just of spring, though, I'll remember the Christmases of my childhood, when Grandma would come to our house on Christmas Eve to spend the night and read 'Twas the Night Before Christmas' to me and my siblings.

I'll remember aunts and uncles long gone, too and cousins who we rarely see these days. I'll remember the dinners, the presents, the laughter of many Christmases a long time ago.

And that's really the story of why I bought Lily of the Valley pips to force into bloom in the winter time. I really bought them for the warm memories contained in the scent of each tiny bell-shaped flower.
family holidays houseplants