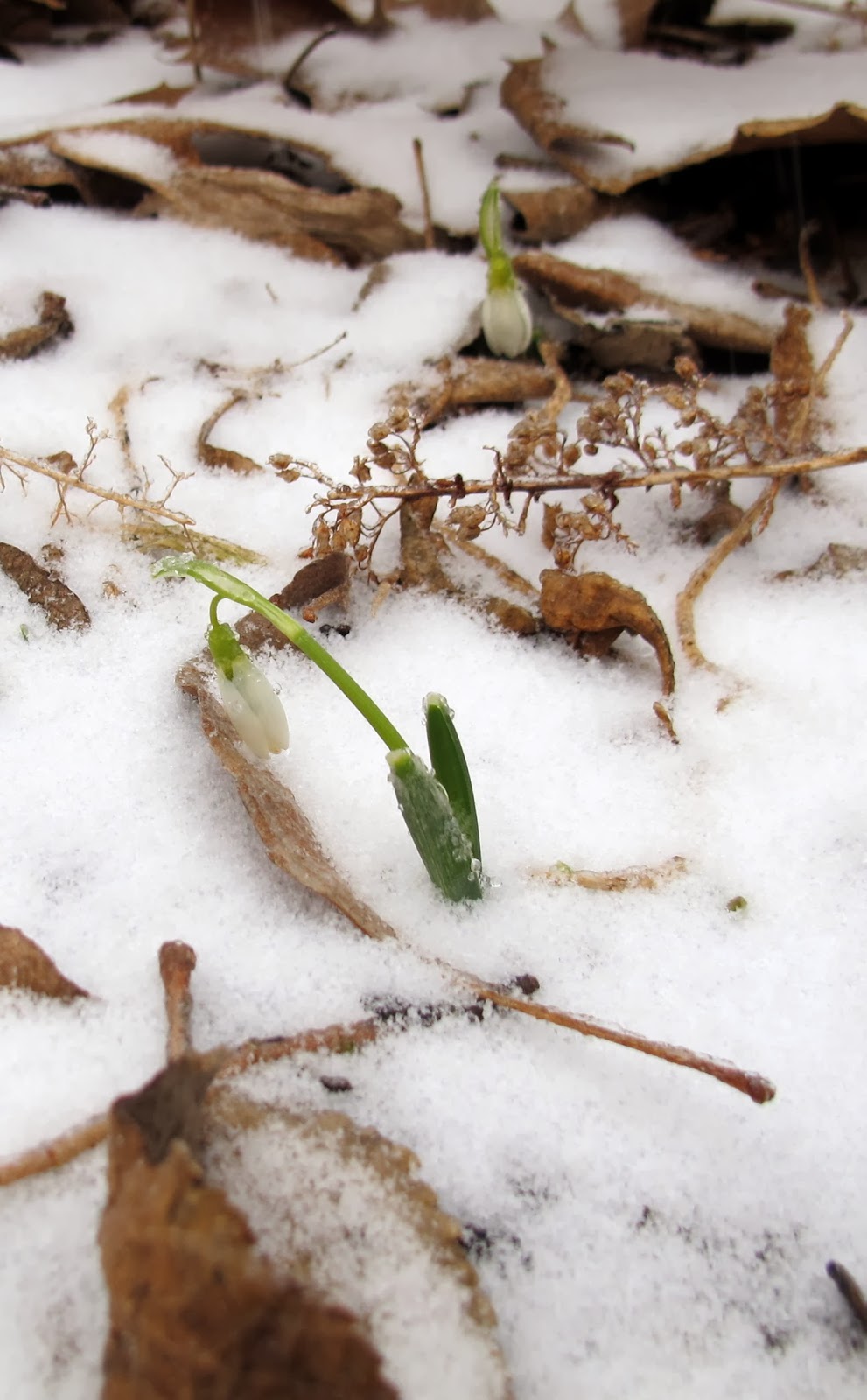 Just  before the two little snowdrops were buried in our first snow of March, I hurried out the front door and took a picture of them. Then I hurried back inside because it is cold out there.

An hour later, the snowdrops were buried under a new blank of snow.

It's not a deep snow, so far, but it's enough snow that when I tell people that I will be out in the veg garden sowing peas in about two weeks, they will look at me, again, like I also believe in garden fairies and pilliwiggins.

Of course I believe in garden fairies and pilliwiggins, and for that matter, toast fairies, too.  It's just easier to explain some things that happen in and out of the garden when you believe in such things.

I also believe that in about two weeks, around March 17th, the soil temperature in the veg garden will be 40 degrees Fahrenheit or above at about a depth of two inches.  That's what it needs to be for peas to germinate and not sulk and rot.

I believe this because the veg garden beds are raised, so they will warm up faster than other areas of the garden. I also believe this because if this weather continues throwing cold and snow at us, I'm going to purchase some plastic to place over the bed to trap in heat and raise the soil temperature.  Then the peas will definitely not sulk and rot.

Yep, that's what I plan to do.

I'm also going to grow potatoes this year, for the first time in many years.  I've split an order of seed potatoes with the Hoosier Gardener. We are getting two varieties, 'Carola' and 'Rose Gold' and will both be growing them in Smart Pots.

I'm thinking about chitting my seed potatoes before I plant them, mostly because it is fun to say. "I'm chitting my potatoes."  Chitting just means letting them sprout an inch or so before planting them.

Plus, I am once again going to grow some tomatoes and peppers from seed. I know I said I wasn't going to this year. I was going to buy tomato and pepper plants, maybe even get some grafted tomatoes. But then I was buying seeds and well, if I have to explain what happened, then you don't understand gardeners.

I'll sow those seeds in a few weeks. Between doing that and sowing peas and chitting potatoes, I'm suddenly going to be quite busy gardening.