All hands on garden! 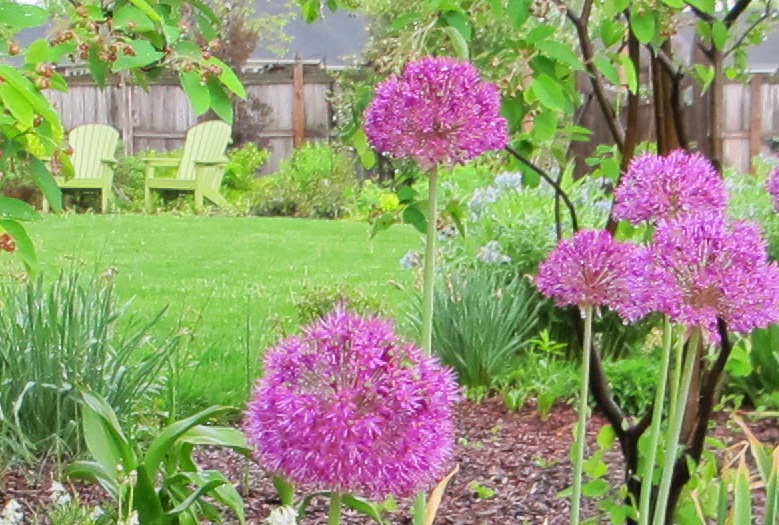 With each walk through the garden, I see them.  Weeds. Dead branches. Plants in trays and black pots.

I'm going to need all hands on garden this week to get this place in shape so I can go on relaxing garden strolls and sit in the garden chairs without remorse, regret or guilt for what I haven't done yet.

All hands on garden.  It's like a rallying call for spring.  There's no turning back now.  Those weeds aren't stopping. Those dead branches aren't going to go away by themselves.

Well, those dead branches are going to go away by themselves, but it won't be pretty.  They'll eventually break off, fall on some prized plant, and then slowly over the years be attacked by insects, bacteria, fungi, and other micro organisms the likes of which you don't want to know about, until they are gone. In their place will be a little pile of compost.

And plants in black plastic pots and trays don't plant themselves.

Well, those plants in black plastic pots and trays sometimes do plant themselves. Out of desparation they send roots out through the drain holes in the bottom of the pot and seek ground to grow in.  It's not pretty or optimal, but sometimes it is oh-so-necessary for the plant's ultimate goal which is to root itself in a good garden.  Public service announcement -- please plant your newly acquired plants as soon as possible.

All hands on garden.  Winters really gone now. Spring is here.  Spring is like a puppy who has figured out she has four legs and if she wants to run, she can.  And she's running now, heading toward Summer.   We'd all love to catch her, hold her, and sit with her in the garden.  But Spring won't allow that. Spring wants to run. So for now the rallying call is...

All hands on garden!

africanaussie said…
what a lovely photo with those bright pink flowers and the lime green chairs in the background. My neighbour and i were just saying yesterday how much we love to just sit and look at the fruits of our labours. I hope you get some sitting time soon.
Sun May 11, 08:10:00 PM 2014

LostRoses said…
I'd love to be all hands on gardening but today it is snowing heavy wet white stuff. I've whacked the snow off my fully leafed-out amur maple several times today.

Love your allium. Mine are all covered by a motley assortment of upside-down garbage cans but no way are the snow and ice going to deprive me of them!
Mon May 12, 02:19:00 AM 2014

Unknown said…
So true ! Spring is unstoppable, and that is the joy of it, as it rushes headlong to summer, carrying us all along , madly weeding and planting and hoeing - or letting nature take its course !
Mon May 12, 03:09:00 PM 2014

Garden Fancy said…
Yay Spring! Bring it on -- winter was far too long. But I understand what you're saying, as this evening I had my own moment of panic requiring deep breaths as I realized just how much needs to be done in the next several weeks. Aaagh! It's still the best time of year, though. Thanks for the post!
-Beth
Tue May 13, 12:14:00 AM 2014

Rose said…
If this rallying cry works, let me know--I could use several more pairs of hands, too! The plant collection on the back porch is growing by leaps and bounds, and my goal is to get them all planted before they die from neglect:) Love the purple allium! Mine is blooming now, too, drawing the eye away from all the faded tulips.
Tue May 13, 08:54:00 AM 2014

CommonWeeder said…
All hands on garden here too. However, I did carry away most of the branches and the lawn got its first mowing. Weeds and potted seedlings still need attention.
Tue May 13, 12:23:00 PM 2014

Covegirl said…
I was able to get all my plants in the ground last week, because i was having guests over the weekend.
I volunteered at the Marion County Master Gardener Plant sale on Monday and purchased more plants. I guess, I need to get out and plant some more. Yippee!
Wed May 14, 08:08:00 PM 2014