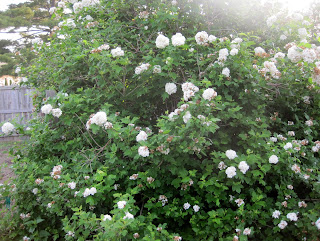 Let us pause to remember the snowball bush, Viburnum opulus ‘Sterile’, for its years of service in my garden.

It provided shelter for birds and blooms for me.  It anchored one corner of the vegetable garden, blocking the view of the compost piles.

It hid more than one weed under its branches, and no doubt a fair number of rabbits sought refuge under its wide boughs.

It taught me to love large shrubs and reminded me always of my grandmothers, who had big snowball bushes in their gardens.

It just grew and flowered and sat in the corner mind its own business.

Then last summer it caught fire blight from two nearby dwarf apple trees. I was shocked. I didn't know Viburnums were susceptible to fire blight. But they are, and there seemed to be quite a few branches infected on the snowball bush.

Today, a tree removal crew came and removed the snowball bush and another viburnum, the way faring viburnum, Viburnum lantana, which anchored the other corner of the vegetable garden.  It, too, was large and past its prime.

The drought two summers ago was not kind to it, and many of its branches had died back.

I will miss them both.

But I won't let the openings they created go unplanted.