Double Flowering Mock Orange Defies the Odds in My Garden 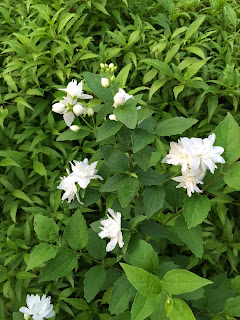 A double-flowering mock orange, Philadelphus 'Buckley's Quill' has defied the odds and continues to grow in my garden

In my garden, the double-flowering mock orange is hidden behind some other shrubs, including a pearl bush, Exochorda,  so it is only visible if you walk into the vegetable garden and look from there  to the backside of a border called The Shrubbery.

It is so hidden my first thought on seeing blooms in that general area was to wonder if the pearl bush was still blooming.

The second thought I had was one of astonishment that I still had a double flowering mock orange in my garden.   I thought I'd lost it forever when I cut it back and moved it one spring to the other side of the garden.

Then I decided it didn't really belong where I had put it so I moved it to another equally unsuitable location.

Then I came to my senses, more or less and moved the mock orange to The Shrubbery, where it is now growing about five feet from where I first planted it probably a decade ago.  It is undersized, still, from all the moving around. It is currently only about three feet tall but should grow to five feet tall, especially if I leave it alone and stop moving it to new locations every few years.

For care, it asks for nothing and that's what it gets.  In fact, as far as plants go in my garden, this one is as close to neglected, nearly forgotten, as a plant can get.

And had I not walked around the garden this morning, I wouldn't have noticed the blooms. 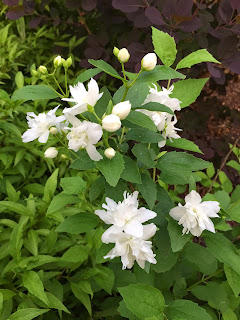 But I did go out into the garden, and I did see the mock orange in bloom.

I was reminded again that many plants grow in spite of the care or lack of care we give them.  And those are good plants to have in your garden.
shrubs