There's magic in a clover lawn 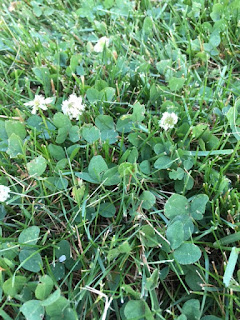 There's magic in a clover lawn.

You can carefully pick the flowers and tie them together to create a tiara fit for a queen and then you are suddenly the Queen of the Garden. And all the garden fairies will gather round to grant you your fondest wishes and dreams.

You can sit for hours staring at the three-leaf clovers until magically a four-leaf clover will appear before your very eyes.

With that four-leaf clover you will have the most marvelous day, filled with all kinds of good luck.  And later you can carefully place the four-leaf clover between the pages of a book, put it on a shelf, and then open the book on a cold winter's day to bring you even more joy and good luck.

In a lawn of clover you can watch as bees show up, seemingly out of nowhere, and visit each and every bloom, eager to get to the sweet nectar contained within.

You can gather clover flowers by the hundreds and make a long-long chain, and maybe tie it to a tree branch and watch to see if tree fairies use it to come down and play.

Yes, there's magic in a clover lawn. The clover will even fix nitrogen in the soil and share its nutrients with the grass to make it greener.

So if we believe there's magic in a clover lawn, and there is no reason not to, why don't people want clover in their lawns today?

Once upon a time, people did not realize what magic there was in a clover lawn.  They never thought about it. They just assumed all lawns had clover growing in them.

Then someone, a villain, came by and commented with just a bit of a sneer about how nice it might look if the lawns were all grass, with no clover at all.

And the people looked at their lawns and thought perhaps the villain, whom they didn't realize was a villain at the time, was right.  Their lawns would look nice if they were all green with no clover.

Then the villain explained how they could put something on their lawns to make the clover go away, and it would stay away as long as they put it on every single year.  I'm sure this villain was wearing all black and had an evil, sinister grin on his face when he sold them that something, that poison to get rid of the clover.

As the years went by, and one person after the next bought the poison from the villain and put it on their lawns, the villain got richer and richer and the people became poorer and poorer. The poor people. They didn't even realize how poor they had become when they had no more clover in their lawns.

When the poison killed off all the clover,  everyone thought they were so happy with their lawns, all green and grassy.  No one realized that when the clover disappeared so did the magic - the tiaras and four-leaf clovers, the long flower chains, even clover bracelets and necklaces.  They were all gone. And the bees left, too.  And nothing in the lawn fixed the nitrogen, either.

Yes, the lawns were green, but they contained no magic.

In defense of the people, they did not know the magic was actually in the clover. They believed the villain.

But then gradually, the people started to figure it out.  They figured out the magic comes from the clover, and they stopped buying the villain's poisons.

Fortunately, once they stopped using the poisons, the clover began to return. And with it came the magic, the tiaras and four-leaf clovers, the long flower chains, the bracelets and necklaces. And the bees came back, too.  And, yes, other flowers joined the clover in the lawn, like dandelions and violets and even plantain.

But the people didn't mind.

The people rejoiced when the magic returned and vowed never to let the villain trick them like that again.
lawns