The pleasure of growing vegetables 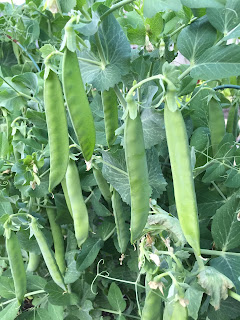 Life is good in my vegetable garden, duly named The Vegetable Garden Cathedral.

In a few days, I'll be picking shelling peas and there are snow peas ready to pick now.

Long-time readers, I mean from way back in the early days of my blog, in the "aughts", know for shelling peas, I swear by the variety 'Green Arrow'.

Check that. I shouldn't swear in a place I call a cathedral, should I?

I'll just say I believe 'Green Arrow' is the best variety of shelling peas, so I always grow it.  The pods have six, eight, up to ten peas per pod.

If you've ever shelled out shelling peas, you'll appreciate the importance of having many peas in one pod.

I spent two evenings, about an hour each evening, weeding out the beds in the cathedral. 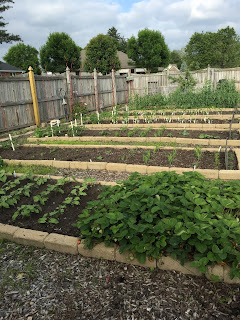 The vegetables were grateful not to have the competition and the whole garden just looks better with tidy beds.

In between the beds, I am having some trouble with nutsedge, thistle, and another weed I've never identified.  I used the weed whacker to knock them all back a bit. Rather than run to the store to round up an herbicide,  I've decided to just keep whacking the weeds down in the paths, pulling the thistle and the other weed I've never identified when I can.  Maybe they'll wear out, maybe they'll keep coming back.  Time will tell.

In addition to peas, I am also picking some strawberries in my little strawberry bed, pulling young onions, and picking the last of the lettuce. The remaining radishes bolted and though their flowers are pretty, I pulled them out, along with the spinach which also decided to flower.  I'm going to replant that bed with more green beans.

Speaking of green beans, I've thrown all caution to the wind and have left my green beans unprotected.  So far this spring, I haven't seen any rabbits. If there are any around, I think they are choosing clover in the lawn over the green beans.  Wise choice, don't you think?  I'm mean wise for me to actually sow clover in my lawn.

I did put plastic forks around the pepper plants to protect them when I planted them several weeks ago. This weekend, I might go completely to the reckless side and pull out the forks.  The pepper plants are getting big enough now I don't think rabbits will bother them.

The tomatoes are coming along nicely, too. I suckered some of them as I weeded, pinching or cutting out those stems coming up in the leaf axils. There are even a few tiny tomatoes on some of them. Yes, already.  Time flies.

Overall, I think this truly will be one of my best vegetable growing seasons in all the 28 seasons I've been growing vegetables. All the seeds have sprouted, including flower seeds along the fence.

I am looking forward now to the many quiet mornings and evenings I'll be spending this summer in the Vegetable Garden Cathedral, weeding, harvesting, sowing, and just enjoying the pleasure of growing vegetables.

I believe everyone who has a bit of sun in their yard or garden should figure out how to grow a few vegetables.  Your garden need not be large and grandiose like a giant cathedral to be a good place to grow food.  It can be a big pot or a small plot. You'll still experience the same pleasure of growing vegetables, and in eating them, too, as someone with a great big garden.

If you don't believe me, the summer is young. Grow some vegetables and see, and taste, for yourself.