If it isn't producing, it's reducing 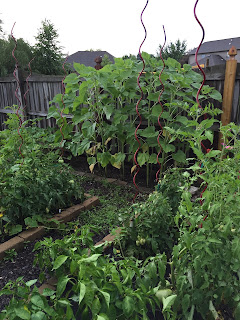 I have a new saying for my vegetable garden.

If it isn't producing, it's reducing.

In years gone by, I planted out my vegetable garden starting in early spring with peas, lettuce, and other cool season crops. Then after I felt pretty sure we wouldn't have another frost, I planted the rest of the garden with tomatoes, peppers, squash, corn, and other warm season crops.

Then I'd pick and enjoy the cool season crops.

Then I'd pick and enjoy the warm season crops.

Then at the end of the season, I'd tear it all out and wait for spring.

Seemed like a good system, except, I would let lettuce and radishes bolt and grow flowers. The pea vines, overtaken by powdery mildew, would make a dry rattle sound hanging on their little fences long past their prime.  Squash vines would become overrun in the late season with squash bugs.  The dried corn stalks would make that eerie noise they make when the wind blows through them on a cool autumn day.

And all of them were sucking up soil nutrients long after they were producing food for me.  Well, except the peas and beans, which are legumes and help fix nitrogen in the soil. But for the most part, those non-producers were robbing the soil of nutrients and giving me nothing in return.  And not only that. They were also becoming host plants for bugs and diseases that I really did not want in my garden.

Those plants no longer producing were reducing the viability, the vigor, of the garden.

My new motto is "If it isn't producing, it's reducing".

And if it's reducing, I'm pulling it out. Pronto.

It takes attention and some effort, but I am working on being more diligent about pulling out the non producing plants in the vegetable garden as soon as they are no longer producing.

In their place, I am either planting a new crop which would have time to produce before the end of the season or  I am  leaving the ground fallow, unplanted.

I have an overall healthier garden, with improved soil nutrition and fewer diseases and bugs. Plus my garden looks better without those non-producing, dying plants.

If it isn't producing, it's reducing.

So pull it out.  Pronto.

You'll have a better vegetable garden in the long run.