What I do about Japanese beetles in my garden

July 01, 2015
The other day, I noticed a butterfly and a Japanese beetle sharing the same Agastache flower.

I didn't get a good picture of them on the flower, though I tried to.  The butterfly wouldn't stay still. The Japanese beetle could not have cared less, though, and later I took a picture of two of the beetles on a raspberry leaf.

There are also Japanese beetles starting to chew holes in the leaves of other plants in the garden, including newly flowering zinnias in the veg garden and of course, the Knock Out roses in front because roses are one of their favorite foods.

For the past several years, there weren't a lot of Japanese beetles around my garden and I was happy about that. I assumed it was because when we had the drought years, the adult beetles were having difficulty laying eggs in the dried up, hard ground.  I didn't get confirmation of that, it's just my own theory.

Unfortunately, though, enough of the Japanese beetles seem to have survived to increase the population once again.

Many gardeners at this point would reach for an insecticide and start spraying to kill the beetles.  Or put down a grub control to kill the Japanese beetle grubs in the ground.  There was a time I might have done the same, but not now.

I like to think I'm wiser now.  There is no insecticide that would kill the beetles and be safe to use around the butterflies and bees, which I want to encourage to thrive in my garden, so the Japanese beetles get a pass.

I could, of course, buy some of the beetle traps that are popular, and I've used them in the past.  I read, however, the traps can lure in Japanese beetles who never knew your garden existed and those that don't get caught in the trap have new feeding and breeding grounds - your garden.   I heard someone suggest you should offer to buy them for your neighbors but that seems a little selfish, doesn't it?

I also read you can just stand there and pick them off the flowers and plants and drop them into a bucket of dishwasher soap to drown them.  That might be helpful but also might be like trying to take the salt out of the ocean. It's tedious.

Plus, I am barely keeping up with weeding. Who has time to pick beetles off plants?

So, if I don't use insecticides, don't place traps around the garden, and don't stand there and pick the Japanese beetles off the plants, what do I do?

I leave the Japanese beetles alone, for the most part, and and endure their existence for the sake of all the butterflies and bees, for the health of my garden, and my health, too.  Occasionally, when I go by a plant with Japanese beetles feasting on it, I might give the plant a big shake to scare the beetles, or flick the beetles off like a kid playing marbles, but that's about it.

The Japanese beetles will be gone in a few weeks. And once they are gone, I'll do my best to cleanup the worst of the damage they leave behind, hopefully surrounded by butterflies and bees, happily flying from flower to flower. 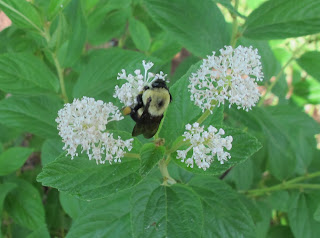 I can think of no other rational solution as someone who gardens for pleasure and wants to encourage bees and butterflies throughout her garden.  Viva la butterflies and bees!

LostRoses said…
You'll find me tapping Japanese beetles into a Baggie of soapy water. But they are a new phenomenon in Colorado, last summer being the first time we've seen them in our region. I'll probably get over it but not this year!
Thu Jul 02, 06:04:00 AM 2015

Pam's English Garden said…
I do hand pick the beetles and drop them into soapy water, Carol, but you are right, it is tedious and not very effective. The damage annoys me, but I have to learn not to mind it. Excellent lesson in your posting. P. x
Thu Jul 02, 06:27:00 AM 2015

Covegirl said…
I haven't seen any, yet!. I don't have any roses, I usually do the jar with the soapy water when I see them.

MissPat said…
I, too, observed that there were very few Japanese beetles the last two summers. I think I found only 2 or 3 last year. But they have returned. What I find interesting is that we have experienced the same dearth of Japanese beetles the last two seasons even though I live many miles away from you in western New York. We have had a very rainy spring/summer so your theory may very well hold water (haha).
I do drop them in soapy water, but as others have mentioned it is mostly time consuming and ineffective just like trying to handpick the red lily beetles that have forced me to give up oriental lilies.
I haven't been able to pull a weed in over a week so I imagine a jungle awaits me if it ever stops raining.
Thu Jul 02, 07:50:00 AM 2015

kate said…
I used to go out early in the morning coolness when they are still sluggish. It was easy then to brush them into a jar of plain water. I capped the jar and left them to their fate. It made a huge difference in my garden.
Thu Jul 02, 08:14:00 AM 2015

Unknown said…
I totally agree with you, Pam. Where is the "zen" if you're stressing over something at outnumbers you but is temporary? I got over the damage-look when my first monarch caterpillar totally decimated my new butterfly weed ( I really like those cute flowers!) but then turned around and put his chrysalis where I could watch it go through its cycle. What a blessing... Thank you for your thoughts, and God bless your garden.
Thu Jul 02, 09:24:00 AM 2015

Karin / Southern Meadows said…
The Japanese beetles seem to be particularly bad this year. I usually find them on our knock out roses but this year they are visiting many more plants including blackberries, buckeye, echinacea,...Ugh! I have considered putting milky spore down but am still not convinced it will help without harming other ground dwelling critters.
Fri Jul 03, 07:53:00 AM 2015

Anonymous said…
I used to get so many of them- they totally decimated my rugosa rose hedge. At that time, I would go out every morning and every evening with a zip lock baggie, and tap them into it, then zip up the baggie to let them all die in agony in the sun. No mercy, it was either them or me. After a few years, I noticed that I had less to deal with. Now, several years later, I only seem to get a few here and there so I now feel as though I can leave them alone. If things begin escalating again, I still have my zip locks.....
Sat Jul 04, 09:20:00 AM 2015

RobinL said…
I have been using the same method this year, but not by design. You see, my knee replacement surgery is imminent, and I have done little in the way of gardening this summer. So they are indeed having a feast, and I am feeling quite guilty at the holey flowers and plants. I like your theory, because we have had enough rain to soften the ground, so perhaps that is why they are in abundance this year? In the past, I have indeed used the dish soap method, and it wasn't nearly as tedious as you would think. It's actually quite satisfying. "Die you munching scumbag!" is the appropriate dialogue for the job. Yes, very satisfying indeed. Perhaps next year when I have my new knee, I will resume my murderous scheme...My, that sounds awful.
Mon Jul 06, 10:03:00 PM 2015