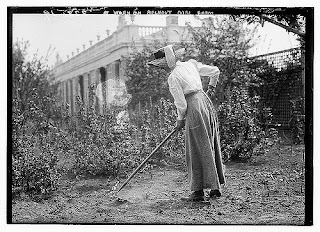 "Within three days last week no less then 210 girls made up their minds they wanted to be farmers.  The 210 came from many different social classes, but for the most part they were women of education."  ~The New York Times,  March 5, 1911

I've fallen down a rather deep rabbit hole and then took another plunge into the history of Mrs. Belmonts' Farm for Woman, also known as the Brookholt School of Agriculture for Women.

It was established by Mrs. O.H.P. Belmont in 1911 to "reach the working girls who are tied up now in unpleasant factories doing monotonous things with machines".

I do hate doing monotonous things with machines.  Except when I am mowing. That's not monotonous. That's exercise, fresh air, a time to think deep thoughts about gardening and life, a chance to see all of the garden.

The entire article in the NYT spells out the grand plan for the farm and how it was supposed to work as a training ground to introduce city women and girls to farming and help them establish their own farms.  However, a year later, it was announced in the NYT that the farm would not continue for a second season.

While those who worked on the farm that first season seemed to enjoy themselves, they didn't quite take to farming. They apparently "were given to wearing high-heeled slippers and dresses poorly adapted to rough work on a farm."

Which goes to show that clothes can make a difference when you are actually working in a garden or on a farm.

Thanks to the Library of Congress, we have free online access to several pictures from the one and only season the farm was in business.

This picture is titled "picking worms from plants". 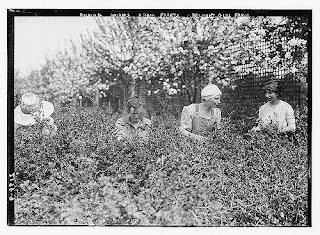 If you are going to try to get others interested in gardening or farming, at some point they need to be introduced to worms and insects but I wouldn't do that until you were quite certain they were smitten with plants and flowers and home grown vegetables.

Then tell them about worms and insects, and spiders.

It's good to see they are all wearing hats in this picture, but only one has on what I would consider suitable gardening clothes. 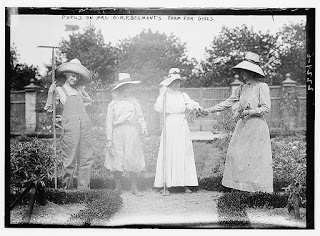 Guess which one? She looks sassy enough to be a gardener. 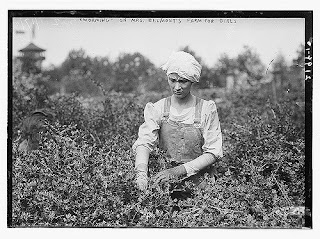 I would not use this picture of a woman picking worms off of a plant to entice others to come on down to the farm.  She looks like she is disgusted with the worms she is picking off those plants.  Not a good game face for gardening.

What's gardening without hoeing?  And the companionship of others? 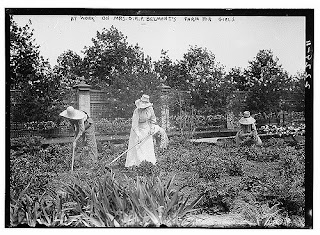 I guess without hoeing, gardening is weeds.

And without companionship, it isn't as much fun.

Perhaps this summer I should establish Miss Carol's School for Gardeners here in my garden? With the proper clothes... maybe I could get at least one season of good work out of a few eager students?

All images from https://www.flickr.com/photos/Library_of_Congress, No known restrictions on publication.