All my thoughts are in the garden 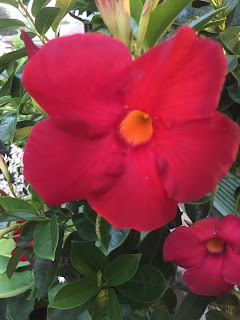 Where are my thoughts these days?

I never have to wonder too much about where my thoughts are because most of the time, I can find them in the garden.

I've been thinking lately about attracting more birds to the garden, not by setting up "fast food" stations like hummingbird feeders, but by planting more plants that provide food for them.

One such plant is a Sundenia® Dipladenias. It's in a hanging basket and likes to vine up and all over. I've seen one hummingbird enjoy its blooms and hope to have time to sit on the patio and watch for other hummingbirds to show up.

I've noticed a lot of birds on the serviceberries. They are loaded with fruit, fruit that I could pick and use to make some jam but I'd rather let the birds enjoy them.

I went out to pick some of my first crop of honeyberries, which I did want, and they were all gone.  The birds apparently got to them before I did.  Admittedly, there was probably only a handful on my two year old shrubs, but I wanted that handful for myself.  I'll be more vigilant next year.  Maybe I'll throw a net over them to keep the birds from getting the fruit?

I probably won't, but it's a thought.

I thought earlier today that I'd just trim up the shrubs on the east side of the house, including some Deutzia and Rhus aromatica 'Gro-Low' shrubs. I trimmed back a couple of deutzias first.  I thought they were just okay when I moved on to the Rhus aromatica.

It was a bit out of control. I think it is a nice shrub in the right spot, but this was not the right spot for it.  I've had to hack it back for years and today as I began to hack it back I thought "why I am I fighting this shrub every year?"  Really, it should be used on a hillside for erosion control or something like that, not on a border next to a house.

And with that thought, I hacked it all the way back until it was no longer there. It's gone, and I have a nice open spot for something else.

Then I thought how that whole east side of my house could be so much better.

So now I've decided to also tear out the deutzias, along with some ditch lilies growing there. And just like that, I'll have a whole new border to replant.

I'm thinking of replanting with fruiting shrubs, which will provide food for me, unless the birds beat me to them.  Or maybe I'll just fill it up with annual flowers.  Or maybe do both since I wouldn't replant shrubs until fall.

I'm glad I went out to the garden today. I would never have thought about pulling out all those shrubs if I would have stayed inside. And now I'm making plans for a whole new border.

See what I mean? All my thoughts are in the garden.