The Ritual of Shelling Peas 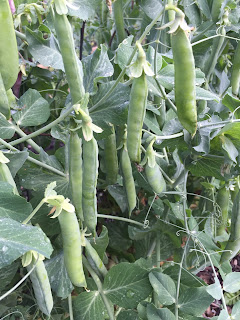 If you've ever grown shelling peas, or English peas as some call them, you know it takes a bit of time to shell out that many peas.

And there is no way to hurry it up.  Well, there is one way. Someone once told me they cooked their peas in the pods and then shelled them as they ate them.

I'm sure that works but by cooking them in the pods they missed out on the ritual of shelling peas.

It's the same ritual every year, the same remembrance.

When I shell out my peas, I always remember how my Dad first taught me to plant peas and later pick them and shell them out.  I remember him telling me how when he was a kid, everyone helped shell out peas... him, his brothers, his parents, and his grandparents.

They grew enough peas to eat fresh in the springtime and to can for the wintertime. That, my friends, is a lot of peas.  I can imagine them all sitting on the front porch at the old farmhouse, shelling out peas, talking and telling stories.

We don't have near enough of that kind of family time any more, do we?

I was pretty happy with my 20 foot row of peas and how many peas I harvested this year. The variety was 'Green Arrow', which I've grown for several years now, ever since I found an old packet of my Dad's seeds for the same variety.

Enough for me to remember the ritual of shelling peas.