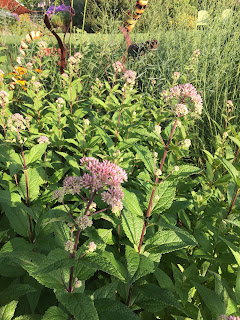 Little Joe Pye Weed is beginning to bloom in the August Dreams Garden border, just in time for Wildflower Wednesday, hosted by Gail at Clay and Limestone.

Little Joe Pye Weed, Eutrochium dubium 'Little Joe', only grows to about four feet, making it a great "back of the border" plant for late summer interest.

Pollinators love it to pieces.  When these flowers actually begin to open, they will fly in from all over.

Like many of our lovely late bloomers, Joe Pye Weed is a member of the Asteraceae family of plants, along with Black-eyed Susans (Rudbeckia sp.) and of course, Asters (Symphyotrichum sp.)

I like to think if you blind-folded me and dropped me into a garden, I could tell you what month of the year it was, almost to the week, by what is blooming.  I'd like to think that, but it would need to be the right garden, with the right plants, like Joe Pye Weed which is always showing buds by late July.

Joe Pye Weed tolerates a range of soil conditions and even wet feet if you have a rain garden. I cannot personally attest to it being deer resistant, but it does show up on lists of deer resistant plants.

I'm happy to have a named variety of Joe Pye Weed in my garden. Regular ol' Joe Pye would grow to five to seven feet. That is tall in any garden.

My 'Little Joe' won't come true from seed so I don't bother leaving the seed heads in the fall. I cut them off and leave the plants standing until early spring.  I also don't panic in the spring if I don't see new shoots coming up right away. 'Little Joe' likes to take its time in the spring.

My little stand of 'Little Joe' has expanded only a foot or so out from the original planting, taking about four years to do so. I don't think it would engulf a garden border by any means.

I like to stand next to it in the evening and look at the pollinators. 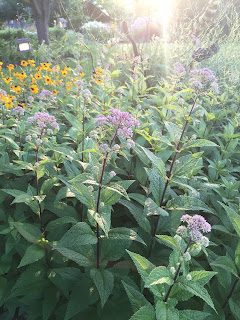 They aren't here yet, because the flowers haven't fully opened, but they'll be here soon. When they do arrive, grab a chair and a tall glass of iced tea and sit next to 'Little Joe' and watch the show. It is much better than anything on television in the summertime!
wildflower wednesday