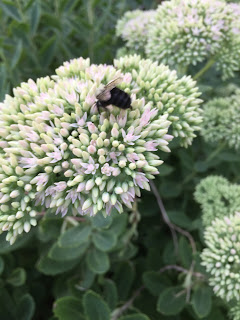 When you "sedum" bees on the barely opening sedum flowers, you know it's time*.  Let's not put it off.  Don't wait. You know it's over.

Yes, it is time for mercy pulling in the garden, as in "For mercy's sake, that flower did not perform well, pull it out and move along."

I would rather look at bare ground than flowers that are begging to be mercifully pulled out of their misery and moved on to the next phase of their lives.

Cucumber vines and squash vines thanked me for ending their squash bug invasion and letting them begin new lives as compost.  And I pulled out two tomato plants which had succumbed to blight. I like to think the tomato plants around them were thankful but they surely must know as the days shorten that their days are numbered as well.

The zinnias need no mercy. 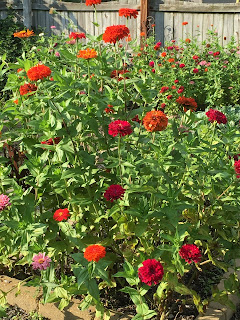 They are happily blooming along and have been for months, and seem to be oblivious of the shortening days. They shall stay, along with the sunflowers, which are destined to become bird food before too much longer.

And while some might say I'm merely hiding the evidence of poorly cared for plants, on my part, by pulling their under-performing stems, roots, and shoots and tossing them out, I will stick to my story.

These are mercy pullings.

It's time. The garden will look better after you've pulled out these plants, and you may create space for something else by doing so.

Like a fall sowing of lettuce where that squash was. Or ornamental cabbages and perhaps some mums and violas where petunias once looked as though you deprived them of water and fertilizer, even though you swear you didn't.

Do it now.  And yank some weeds, too, while you are out there.

The flowers that are left will look so much better. And if those that are left look better, then the whole garden is suddenly transformed from tired and weedy to a serene backdrop for fall, with its colorful leaves, clear blue skies and new fall flowers.

Now suddenly, that mercy pulling doesn't seem to be all about the plants.  Now it's all about the gardener and the joy you get from a garden that is well cared for, where every flower looks good and everything contributes to a serenity that you can find only in a well-kept garden.

Mercy pulling. For the garden.

*The sedum blooms really aren't the trigger for "mercy pulling", I just wanted to use that pun. You should pull flowers and spent plants out whenever they detract, rather than add, to your garden, regardless of the sedum blooms.