Turning Facebook Into Flowerbook One Pic at a Time 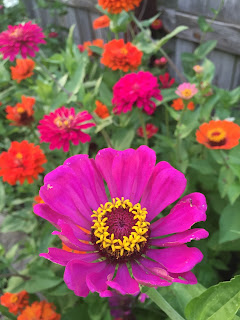 I seem to have become known for zinnias this summer, at least amongst my friends on Facebook.  I've posted a lot of pictures of zinnias since they began blooming and started tagging them with #TurnFacebookIntoFlowerbook.

In turn, a few friends, maybe three or four, have posted pictures of their zinnias and tagged me.  I'm tickled zinnia pink when they do so.

And wouldn't it be nice if Facebook was filled with all kinds of flower and nature pictures? Yes, move over kitty cats, cute babies, and selfie addicts, here come the flowers.  I would love it if my FB feed was filled with flower pictures, all tagged with #TurnFacebookIntoFlowerbook.

To see it as a trending hashtag would be "awesome", as some are found of saying.

Of course, the ulterior motive behind getting people to use the hashtag #TurnFacebookIntoFlowerbook, is to get more pictures of flowers on Facebook. It's that simple.

I believe if more people saw more pics of flowers grown by their friends, they might be inspired to add flowers to their own life and Facebook feed.  Those flower pics are powerful. I know of at least one friend who swears she is now going to buy zinnia seeds next spring to sow in her own garden after seeing all the pics of my zinnias.

To that I say "copy cat, get your own signature flower"! Kidding. To that I say "bravo" and maybe sow a few seeds for marigolds while you're kneeling down there sowing those zinnia seeds.

Might as well.  And sow some seeds for sunflowers, too.  There is nothing that is as impressive as a sunflower plant in mid-to-late August soaring eight or nine feet in the air with a big ol' happy flower on top. 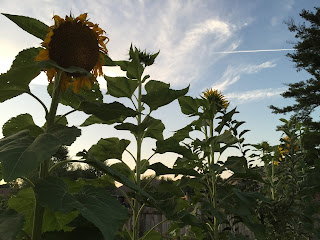 My tallest sunflower this summer is a variety called 'Heirloom Titan' from Renee's Garden Seeds. It is nine feet, six inches tall, so far.  I don't care who you are or what you grow in your garden, you cannot deny it's impressive that one seed, one small seed no bigger than a sunflower seed, can grow into such a tall plant in just a few months.

Now that's the kind of "wow' stuff we need to see on Facebook. Extra tall sunflowers.  And pretty zinnias.

Wouldn't you agree? Oh, you do agree? Then post your own picture of flowers on Facebook and tag them "TurnFacebookIntoFlowerbook".  Let me know about it, too, so I can keep a count.

Who knows? Perhaps one day there will be too many posts on Facebook tagged with "#TurnFacebookIntoFlowerbook" to count them all.

Wouldn't that be great? Then we'd have the Flowerbook we all long for.

Rose said…
I've enjoyed your zinnia photos on Facebook, Carol, and while I already have zinnias in my garden, your sunflower photos have inspired me to plant sunflowers next year. I'll have to remember to use the hashtag the next time I post--I don't use Twitter, so I don't normally tag things. I agree with Dee and everyone else--I much prefer all the flower photos to all the political stuff!
Mon Aug 22, 08:09:00 AM 2016

lynnblog said…
For a great Facebook page featuring plant photos and info, try Georgia Native Plant Society. And if you are not already following Ellen Honeycutt's excellent blog, here is the link: usinggeorgianativeplants.blogspot.com/
Love you tagging idea, and your blogs always give me a smile.
Tue Aug 23, 07:42:00 AM 2016

best wheelbarrow said…
No one can reject the lovely application of flower. When we see at a flower, our mind became changed into a positive attitude.
A flower is symbol of love and freshness.

In our facebook or instagram, we all busy to post/share our selfies/wefies. But if/when we use a beautiful flower in our profile/cover, then it would make a positive change.

Do we feel bore when we go to lake or valley where there are lot of flowers ? Never . We feel a love to flowers after taking a deep breathe.

So why not we change our profile pictures into flowers, so that the whole social media would flooded by flowers ? at least for few days.

Probably, Microsoft used a flower picture in default desktop picture in windows 8. They actually felt the attraction of flower. And they also expect that a PC user would start his/her computer operation with a freshness of flower.