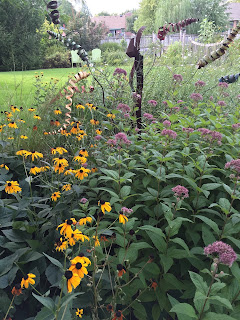 My late summer-autumn blooming border is coming along nicely as we round the corner and head straight to the end of August.

I affectionately call this particular border August Dreams Garden because it is planted with mostly native plants that bloom in mid to late summer and early fall.  It's the most designed garden I have, and I try to stay true to the overall concept by planting mostly native, prairie type flowers that bloom late in it.

I will admit there is one daylily called "Notify Ground Crew" with flower scapes that are nearly five feet tall planted in there and near the edge, I snuck in a couple of mums I got to trial.  And earlier this summer I planted one Crocosmia 'Lucifer' in a bare spot.

I have every intention of moving the Crocosmia next spring, and may for sake of "sticking to the plan" go ahead and move the daylily and the mums. Then this truly would be a completely native wildflower garden.

Pardon me if I don't use the botanical names to tell you it is filled with Black Eyed Susans, Joe Pye Weed, Boltonia, New England Asters, Snakeroot, Rattlesnake Master, Sneezeweed, Goldenrod, Tall Phlox, Blazing Star, Cupflower, Wild Petunia, Swamp Milkweed, and Prairie Dropseed. At one end, there is a copse of three serviceberries and at the other end, a red maple.  All native to North America.

Because not much happens in this border until around the fourth of July, I have a sculpture in the center of it, from Girly Steel, a local artist, to add some interest when there are no flowers. I like this sculpture, which is actually a bunch of curlicues and a few straight leaves made out of steel.  It fits in with the overall look of this border. I can't imagine what it would look like with a sculpture of a Greek god or goddess, can you?

I will admit when the garden designer first proposed this option for this border, I had to throw out some of my notions of what I did and did not plant in my garden, like did not plant grasses. I'm glad I tossed those notions into the compost bin where all my dumb ideas go.

This garden is easy to maintain.  I just let it grow and then at some point, which has lately been early spring, I cut it back to the ground.  However, even if I wait to cut it back, I look at those seed heads and ask myself "do I want those plants to grow all over the garden?"

For the most part, I don't. I've learned the hard way how prolific New England asters can be, and how far and wide they can cast their seeds. I've noticed that the Black Eyed Susans can do likewise.  And given the size of the Cup Flower plants, I don't want to find out how well they self sow.  So late in the fall, well after the killing frost, and after the birds have had a chance to eat a bit from the garden, I cut off many of the seed heads.

In such a small garden, it helps me maintain some sense of order, in a garden that doesn't at first appear to have much order. But it has an order, an order that only wildflowers can bring to a garden when they are happily growing amidst, between, up through, around, and over one another in one happy late blooming party.

Join in for Wildflower Wednesday hosted by Gail at Clay and Limestone on the fourth Wednesday of the month to see more posts about wildflowers.

Gail said…
I love your mostly native/wildflower garden. Do I need to send you Practically Perfect Phlox Pilosa for early spring bloom? xo
Wed Aug 24, 09:38:00 AM 2016

Amy said…
Generally, I think wildflowers are having stronger living desire compare to greenhouse one. Lesser care is needed.
Sun Aug 28, 12:07:00 AM 2016

RobinL said…
I'm suddenly like this idea, of having a particular garden bed devoted to native plants. I have natives here and there, but I'm no purist, for sure. Still, I'd like to do better. I can't quite get past the idea of free plants, so most of my flowers are allowed to seed themselves about. And then I wonder why things can get a bit chaotic?
Sun Aug 28, 09:58:00 PM 2016