Additions to the Garden of Southern Follies and Delights 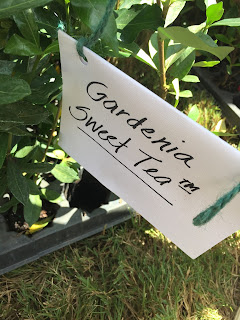 In a couple of months, a couple little starts of Gardenia 'Sweet Tea™' are going to wake up on a snowy morning and realize they are not in the south any longer.

They are in my Garden of Southern Follies and Delights, nestled in with two camellias that have so far survived one winter, three "big box" crepe myrtles sold as perennials, and a bunch of dandelions.

The dandelions are ruining the party, so to speak, so I'll be evicting them soon and adding some more mulch.  They are why I can't show a picture of The Garden of Southern Follies and Delights. It looks awful. It looks worse than that kid in the grade school class picture who insists on making an awful face, ruining the picture for everyone else.

But really, there isn't much to see so far in The Garden of Southern Follies and Delights, as not one of the plants in this garden of southern plants which should not be grown in the midwest is more than a foot or so tall.

One of the camellias in this border, 'April Remembered' has started to branch out some and looks quite nice, if you consider a camellia a foot tall "quite nice". It hasn't bloomed much, though, which is probably why the plant looks so good.  The other camellia, 'Snow Flurry' is a fall bloomer and doesn't look so good but does have a few flower buds on it. I'm going to nip those buds off, though, so the plant hopefully puts its energy and effort toward surviving another winter.  Oh, the sacrifice.

But back to the gardenias. I'm willing to try to grow them in my zone 6a garden because they were offered free to me and many other garden communicators who attended the conference of GWA-The Association of Garden Communicators, held a few days ago in Atlanta, Georgia.

Let's hope they add delight and not folly to my Garden of Southern Follies and Delights!