I left my garden for a week 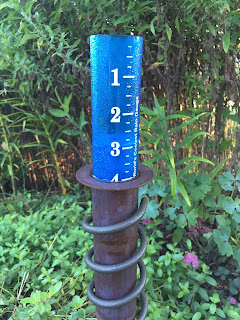 I left my garden for a week, and when I got back, I went out at first light to see what happened while I was gone.

Rain seems to have happened.  Four inches of it, if you want to believe this rain gauge. I think it shows more rain than we actually got, or the other rain gauge I have shows less. I'm not sure which is right, so I generally average them.  I know that's probably not the right amount either.

Let's just agree it was good to get rain.

The zinnias kept blooming.  This has been the best year for zinnias, at least in my garden. There is not a spec of downy mildew on the leaves, even though this is a common problem with zinnias, nor have there been many Japanese beetles feasting on them. 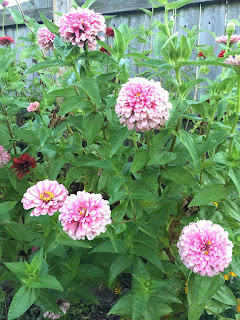 I will definitely and justifiably sow seeds for zinnias again next year.

While I was gone, some seedlings came up in the veg garden. 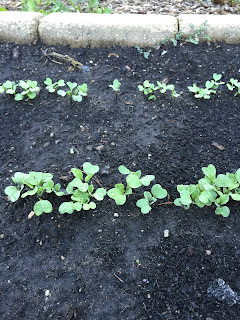 Some years, which means most years, I don't sow seeds for fall veggies. But this year, I decided I would try some late-sown crops. I had the seeds, took the time, and hope to squeeze a bit of lettuce, a few radishes, perhaps some spinach, and if I'm really lucky, some peas out of the garden before a hard freeze.

I also discovered some new blooms showed up in my absense. 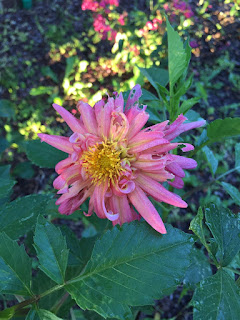 It looks a little rough because some bug was eating on it right before I flicked it off to take this picture.  I admit I planted this dahlia late, so I'm happy I got at least one bloom.

I also planted this miniature gladiolus late and so it decided to bloom while I was gone, too. 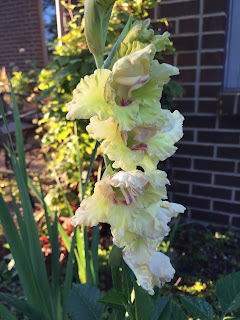 I'm not sure what its name is, other than "mini green".  I bought it at a garden show.  Yes, you know I bought it because it was supposed to be green.

Elsewhere in the garden, I noticed someone has been digging in the lawn. I am hoping they are digging for grubs or worms, but fear they are digging for crocus corms. I'm pretty sure they won't dig up all the corms since I've planted close to two thousand of them over the last several years. I can't imagine that any squirrel or even a herd of squirrels, could dig them all up.

While I was gone, I saw where a spider took up residence in the front garden. It built a gigantic web that goes across the front walk, ready to trap anything that tries to get near the front door.  Thankfully, my sister noticed it when she came by to check on the garden and alerted me to it before I got home.

I'm pondering if this particular spider is breaking the spider rule around here. You know the rule. Spiders outside are left alone. Spiders who come into the house, and are discovered, die.

I might need to add an amendment about spiders who block the entrance to the house.

While I ponder that, I'll leave you, dear reader, with one final picture of the goings on that went on while I was gone from my garden for just a week. 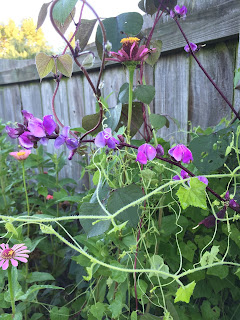 The hyacinth bean tried to overtake the mouse melon vines, while zinnias watched. Crazy, isn't it?