Garden Fairies Discuss What Happens When They Argue 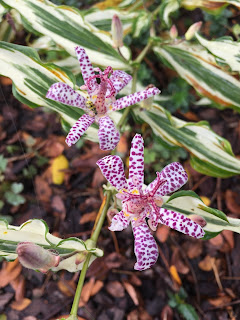 We are garden fairies and we were just discussing what happens when we argue amongst ourselves.  What happens is the toad paints the flowers of Tricyrtis to look like the spots on his back and so we end up with toad lilies.

He did this while we garden fairies were arguing about whether the flowers should be white or purple.  We at first were just a bit miffed that the toad used our secret flower paints to do this behind our backs, but then when we saw the final result, we were quite pleased.

We should argue more often.

We are still discussing it. And by discussing, we mean arguing.

Anyway, lovely as that story, The Legend of the Toad Lily, is, and it has been told on this blog before, if you have been paying attention, that is not really why we are posting today. That was just the hook to get you to read this post.

We are garden fairies, we are tricky like that. We get people to do stuff, but for some reason we cannot get Carol out into this garden where there are certain tasks, namely weeding, and secondly namely taking in the houseplants, that she has not done and needs to do now or there will be no garden and no houseplants in the foreseeable future.

We have no idea what she was doing instead of weeding and houseplanting but we know this. And yes, houseplanting is a word or we garden fairies would not have used it. She was gone a lot in the last month. First there was a vacation.  To a beach. And we are certain of this because there is a bag of sea shells as evidence.

Then it appears she went to Atlanta to meet up with all kinds of other garden communicators. And there is a big stack of business cards and a big row of new plants as evidence of that trip.

Since returning, we thought Carol would be all garden-a-fire to get out here and weed.  She did replace the plants in the front containers. Goodness gracious, those plants looked like frass after the summer, so it was a good thing she replaced them with flowering cabbages, pansies, some dark black ornamental peppers and a few mums. We did not even mind the mums we were so happy that the frassy summer-worn-out plants were gone.

And she did mow the lawn. Then she sat on the lawn like she had all the time in the world. We are garden fairies and we have an announcement for Carol.  News flash, sweetie. Time didn't stand still in the garden while you were gone, and now it is fall.

We also saw in the window that she is busy at the computer in the library. Writing. A lot.  If she's writing a book, we garden fairies want in on the action. But we don't want to be part of just any book, we want our own book.

After all, we are garden fairies. Patient, kind, wonderful garden fairies, waiting for Carol to get busy weeding and houseplanting before the snow flies.

And no, we are not going to do Carol's gardening for her. We are garden fairies. We are busy.There are leaves to paint.

Submitted by:
Violet Greenpea Maydreams, chief scribe and chief spy for the garden fairies at May Dreams Gardens