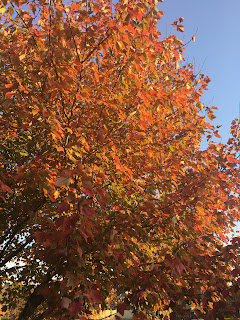 Admit it. You read that title "Rare in Cultivation" and your heart skipped a beat. Maybe your fingers started shaking a bit as you quickly scrolled down to see what plant it is that I am going to write about that is "rare in cultivation".

You just have to have it. Case closed.

Yes, if you want to get a gardener to want a plant, you need only describe it as "rare in cultivation".

That's it. With those three magic words-- "rare in cultivation"-- gardeners will clamor for whatever the plant is, insist they must have it, and lie awake nights figuring out how to get it.

Based on the names they were given, I knew both would have good fall color. And they do.

Nice, Carol, but what is this "rare in cultivation" plant you have that I want!

Another plant with a nice fall show in my garden is Begonia grandis. 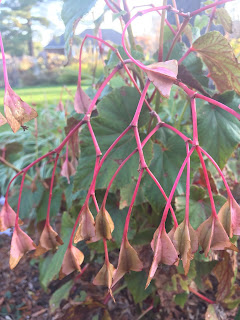 I think the seed heads look just as fancy as the flowers did, and I love the red branches against the green leaves. I'm going to let those seeds mature and see if this begonia will do a bit of naturalizing in my garden.

I don't think hardy begonia is "rare in cultivation" but I don't see it for sale that often and thus I don't think a lot of gardeners think to grow it in their shady areas.  But if I told everyone it was "rare in cultivation", they'd be asking, begging, clamoring, for seeds and starts and divisions and cuttings--whatever they could get to get it started in their own gardens.

Again, Carol, what is this "rare in cultivation" plant you have that I want! 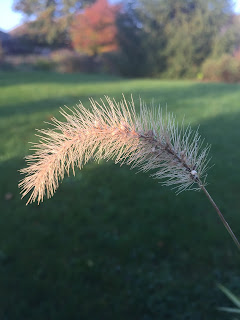 It will suddenly, and erroneously, be thought of us a plant that few other gardeners have and therefore it is special to have such a plant. After all, "rare in cultivation".

This foxtail is technically "rare in cultivation" because it is a common weed and no one would cultivate it knowingly. Fortunately, it is also an annual weed so if I get out there quick and cut off those seedheads, maybe next year, I'll have less of it.

You trickster, Carol, you don't have  a"rare in cultivation" plant to share, do you?

Lisa at Greenbow said…
I actually think of this Begonia as Rare in Cultivation. As you say you never see it for sale in this area. I brought mine from down south. It grows well and yes, those seed pods are most interesting.
Mon Oct 31, 07:18:00 AM 2016

Kathy said…
I confess, I did want to know what you had that was rare in cultivation. But I wasn't going to rush out and get one for myself, because too often other people's plants aren't hardy for me. Like that begonia, for instance. I did wonder what you had in your garden that I didn't already know about! I thought perhaps you were going to talk about that goldenrod you have.
Mon Oct 31, 09:36:00 AM 2016

My "rare in cultivation" thoughts went to a native, local wildflower that I just identified in my yard, Godfrey's goldenaster (Chrysopsis godfreyi). It's rare in cultivation - and I actually think it's pretty enough that it shouldn't be. I'm going to see if I can get a few seeds to germinate so that I can share it....
Mon Oct 31, 06:18:00 PM 2016

Unknown said…
Good one, Carol. It certainly worked on me! The Begonia grandis does indeed have gorgeous seedheads. BTW, mine came from a fellow gardener and has naturalized just enough over the past three years.
Tue Nov 01, 08:57:00 AM 2016