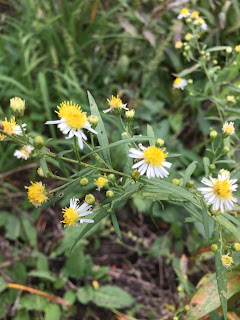 A little fleabane in the garden never hurt anything or anybody, and it's good for the pollinators.

Annual or Daisy, I rarely pull it out when it shows up unexpectedly, even though it's a common wildflower. Some might even call it a weed. They can hush up with such a word.

I don't think it hurts the garden to have a bit of fleabane growing up, around, and through some of the other flowers, so when I see it, I thank it for coming to my garden, and leave it be.

Well, I don't actually thank it. That would be something an eccentric gardener might do. Okay, I might thank it but that's between me and the fleabane.

I've don't remember ever seeing fleabane for sale around here, or anywhere, but that doesn't mean it isn't for sale someplace. But who needs to buy what Mother Nature provides for free?

Which reminds me. I've been reading that lots of little bees and other pollinators overwinter in the hollow stems of different perennial flowers and grasses, so we shouldn't get all rambunctious and ambitious about fall garden clean up and cut everything down now, lest we destroy their winter homes.  I'm taking that advice to heart. I may remove some plants infested with powdery mildew. I may cut off some seed heads of prolific self-sowers like asters, but I'm going to leave most of the stems standing until spring, especially in my August Dreams Garden which is mostly native prairie wildflowers

That will make spring time busier in my garden, but my overwintering garden guests will be happier because of it. And my friend Gail, who hosts Wildflower Wednesday on her blog at Clay and Limestone to promote wildflowers and pollinator friendly plants on the fourth Wednesday of the month, will be pleased with me, too.