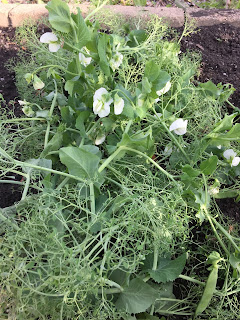 I had some time, I had some seeds, so I decided to sow those seeds for a fall harvest in my vegetable garden. I put them all in one bed, the bed where squash plants met an early demise at the first sign of those awful squash bugs.

By putting them all together in one bed, I figured I could cover them easily enough if we had an early frost.

But we didn't have an early frost. In fact, we've only had one morning where there was even a hint of frost. Overall, the weather has been mild all fall and so with minimal effort on my part, I've got some salad veggies to pick.

First up—a few plants of the new pea variety from Burpee, 'Masterpiece'. They tout that this variety doesn't need support and it has those really awesome tendrils.  The leaves, tendrils, pea pods and peas are all edible.

I was surprised the peas grew enough to flower and then lo-and-behold, there is a pea pod, too. I'm not sure why I was surprised, though. Peas grow.

The tendrils are my favorite part of this variety. They look good all on their own in a vase and would make a nice garnishment for a vegetable dish or a salad. 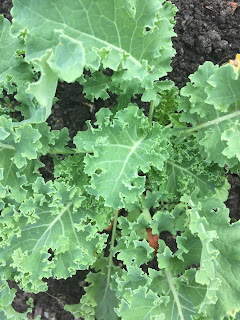 I rarely grow members of the Brassicaceae family, the cruciferous vegetables like kale and its cousins cabbage, broccoli, cauliflower and Brussels sprouts, not because I don't like them, but because they are almost immediately attacked by little green caterpillars and presumably other bugs.

I was pleasantly surprised that the bugs have left the kale alone. I guess it isn't the brassica-eating bugs' season, so the kale continues to grow virtually untouched, except by me. I've been snipping off leaves here and there for salads.

On the other hand, just as an aside, the Brussels sprouts I planted in the spring have been nearly decimated by bugs. 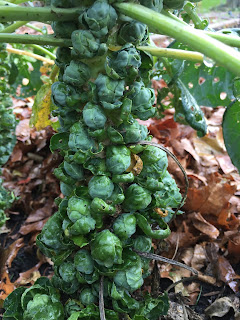 "Carol, why didn't you do something about that?"you are asking yourself. I shrug my shoulders. I just didn't. Maybe because the Brussels sprouts are an experiment for me, an experiment I wanted to fail.  I only grew them to live up to my own challenge—Grow vegetables you don't like because maybe you will like them when they are homegrown.

But it looks like in spite of my lack-a-daisical approach to growing them, I'm still going to get some Brussels sprouts. And I'll have to eat them.

Side note, you can see in the picture of Brussels sprouts that I've started to put shredded leaves on the veg garden beds. I decided the beds need more organic matter, so I'm adding leaves from the lawn and plan to harvest three bins worth of compost to put on top of the leaves. Then, where those three bins are currently, I'm going to make that area another flower border.  I have two other compost bins that I've set up on the other side of the veg garden, next to a Brown Turkey fig I just planted. I'll make do with just two compost bins.

Anyway, what was this post about?  Or right, fall sown vegetables.

I'm pulling some nice lettuce out of the garden. 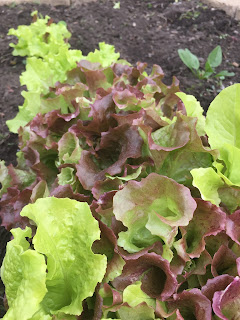 I generally plant lettuce pretty tight and then just reach in and snip the bigger leaves as I'm ready to eat them.

I'm also growing some spinach—you can see the tiny green leaves in the upper right of the picture of lettuce—but I haven't been as impressed by it, perhaps because that's the one crop the rabbits seemed to take a fancy to. And no, I didn't do anything to protect the spinach from the rabbits. But there are a couple of little plants of spinach left so I'm hopeful with the continued mild fall, they'll grow a bit more and I'll have some spinach to eat with my lettuce.

The other vegetable I planted was radishes. They did okay. I thinned them just a bit late so they didn't form roots as big as I would have liked. Either that or I planted them when the moon was waxing and I should have planted them when the moon was waning, if you take stock in such things. But in spite of my laziness and potentially poor timing, I still got a few to eat and there are more coming on.

Considering I've not really planted much for fall in my little garden in the past, I am pretty happy with what I'm harvesting now. It is better than nothing and honestly took minimal time. A little sowing, a litte weeding and now I can make a fresh salad out of it.

My only complaint is I didn't sow enough of these little crops. I sowed short little experimental rows.  Too short. Where was my faith in those seeds and my gardening abilities?

Who knows, I might even try some fall cabbages.