A Bit of Advice on Houseplants 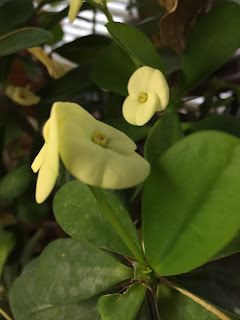 If I may, I'd like to offer a bit of advice on houseplants. Or is it house plants?

I prefer houseplants, myself.

I have a few houseplants that I keep and enjoy. I've had some of them for years, even decades.

My night blooming cereus dates back to 1987 and prior to me taking ownership of it, my father cared for it. I think he got it around 1970 or so? That would make it 46 years old.

My pothos, sometimes called Devil's Ivy, dates back to 1987. That means it will soon be 30 years old. Like several other houseplants, it arrived in a funeral planter and thus is always associated with the person whose funeral it arrived for.

And I have an aloe plant that came from an aunt who got it from my grandmother who supposedly got it from my great-grandmother. That would put its origins back to the 1940s or earlier. Of course, my aloe plant doesn't look quite that old. It renews itself regularly with new starts, the same as the pothos does.

I'm not sure what I would do if I did see them without blooms, and I'm not anxious to find out.

What is especially nice about the Crown of Thorn plants is they tend to bloom more in the wintertime, which is of course, when I appreciate the blooms more. Smart plants!

So here's my houseplant advice.

Grow plants that are "sure things", like aloes, crown of thorns, even pothos.

You know what's not a sure thing, at least for me?

This is the time of year when I see little rosemary topiaries for sale, right next to the poinsettias (which are also easy to grow as long as you aren't trying to get them to color up again the next year).

I do not have much self-control when it comes to plants and even though a little voice in my head tells me not to buy the rosemary plants, for they will surely die, I still usually buy one once a year. Then a few months later, when the rosemary plant has dried up and dropped all of its leaves, I toss it out.

This year, I bought a rosemary plant in the produce department of the grocery store. It was with other potted herbs, all wrapped up in protective plastic. It looked so nice and fresh. Healthy. Just a lovely little potted rosemary. Nothing fancy, not even shaped like a little Christmas tree.

I saw those rosemary plants and decided this was the year. My time had come! I was going to have success with rosemary because surely this small plant would not shrivel up and die like the fancy holiday rosemary plants.

I stood there in the produce department looking over those rosemary plants for quite awhile. I touched them and smelled their lovely rosemary scent on my fingers. I looked outside. It was warm enough that I was sure the rosemary would not catch cold and die on me if I bought it and took it home.

Yes, I convinced myself this rosemary plant was going to make it. 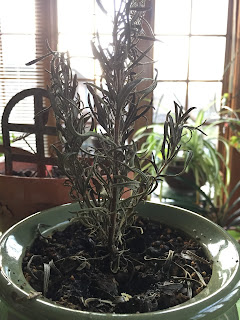 I took it home, repotted it, and gave it the best care I knew how to give a houseplant.

And then it shriveled up and dropped its leaves like all the other rosemary plants I've purchased.

Yes, this rosemary plant, which I had such high hopes for, died after just a few weeks in my sunroom, just like all the other rosemary plants before it.

But is it really dead? Could I be mistaken?

Perhaps it is playing possum? Or has just gone dormant? Or is just messing with me?

Time will tell. I'm going to keep watering it and pretend it is alive. Maybe it is alive? Maybe in the spring it will have new leaves? Maybe I gave up on all the other rosemary plants too soon and sent them to the compost heap just when they were ready to leaf out again and announce "kidding"?

Or maybe I'm delusional and need a long therapy session with Dr. Hortfreud?

I'll report later on which scenario is correct.

In the meantime, my bit of advice on houseplants is to always have a few in your house that you know will grow well and flower a bit.  And avoid the rosemary plants, which will lead to nothing but heartache and anguish.