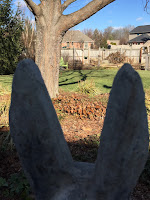 The old rabbit, Sixteen, sat by the garden gate, watching for her replacement to show up, a new rabbit named Seventeen. While she sat and waited, she surveyed her garden and thought back over the year.

"I thought I did pretty good with the weather," Sixteen said to no one in particular.  And she had done a good job with the weather. Everything was seasonal and as expected with no lows too low and no highs too high, and there was enough rain, too.  However, it seemed she had trouble finding the dial to go from Fall to Winter, making for a longer than normal fall.

Once she did find the dial to move from Fall to Winter, she promptly ignored all instructions to turn it slowly and with a quick flick it was suddenly winter. She laughed as this sent everyone scrambling to get ready for the snow, ice, and single digit temperatures that soon followed.

Then Sixteen remembered the Camellias and was sorry she had pulled such a stunt. She hoped they'd be okay.

Oh well, Sixeen enjoyed the flurry of activity toward the end of the year. She was used to it since she happened to be in charge of the garden when Carol decided to retire from what she called her "day job" way back in early summer.

At first Sixteen and everyone else in the garden were quite concerned upon hearing that Carol would be around more often. After all, there was a certain rhythm to the garden that everyone enjoyed and expected. Would Carol disrupt it?

As it turned out, Carol seemed to fit right in with the rhythm of the garden. She got right to work, though some grumbled about how she didn't weed nearly as often as should have and sometimes she just sat there, supposedly thinking. And what was her obsession with zinnias all about, really?

Everyone was pleased, however, when Carol added a new variegated dogwood in Woodland Follies and planted a Brown Turkey fig in The Vegetable Garden Cathedral.  Sixteen also liked that she planted more bulbs in the lawn and a lot of tulip bulbs in the garden borders.

"Seventeen will love those," she said to the garden fairies who had gathered around the gate to see her off. She bore no grudge that Seventeen would see those blooms and she wouldn't.

"But one thing I am a little bit jealous of is that Seventeen will be in that book Carol says she is publishing," said Sixteen.

"After all, Carol wrote the book on my watch, so is it fair that Seventeen will be in the book as the date published? I hope I at least get a mention in the acknowledgements!"

Just then, Sixteen checked her watch and realized it was nearly time for Seventeen to arrive. Peering out the gate, she caught her first glimpse of her youthful replacement.  Seventeen was hopping toward the gate with high leaps full of energy— she seemed quite excited to reach the garden.

"Hello, Sixteen!" Seventeen shouted as she saw the gate. "I'm here and I'm supposed to ask if you have any instructions for me before you leave."

"Do I ever have instructions for you," replied Sixteen. "But I have no time to sit here and go through all of them so I scattered them about the garden. I think and hope you'll find them as you need them. And do watch the weather. Carol likes it to be seasonable and just that, with plenty of rain when she needs it."

Just then a far off clock began to chime the midnight hour.

"That's it for me," shouted Sixteen over the sound of the bells. "I'm off, good luck and all that Auld Lang Syne stuff."

And with that Sixteen was gone and Seventeen was now in charge of the garden.

Surveying her new garden and already making plans, Seventeen asked the garden fairies, "Now, what is this about a book Carol is writing?"

The garden fairies giggled and pointed to the windows of the library where they could see the desk where Carol wrote, in a spot where she had a good view of the crabapple tree and all the birds roosting in it.  Excitedly they told Seventeen, "She says it will be out for the world to see well before the crabapple blooms again."

"Wonderful," said Seventeen. "I'll check on it first before I start on the much needed clean up of this garden. I need to find the first set of instructions Sixteen left me. Hopefully they are inside where it is nice and warm. But there will be time for that tomorrow. Today we say..."

"Happy New Year, everyone, from all of us at May Dreams Gardens!"
holidays