Enga: Enemy of the Garden 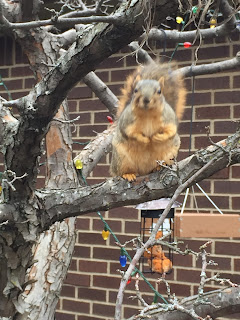 The other day, I had a close up encounter with Enga, short for ENemy of the GArden.

Enga a fat squirrel who hangs out around the bird feeders, trying to steal the peanuts I've been putting out for the blue jays.

The blue jays love the peanuts. At times I've counted six or more blue jays hanging around the crabapple tree, waiting for their chance to get a peanut from the peanut wreath.

Then I saw Enga climb down to the wreath and grab a peanut for herself. One day, she actually knocked the peanut wreath to the ground. I'm sure she then proceeded to gorge herself on peanuts because when I found the wreath, it was empty.

And she is fat.

I did the only thing I could do after that happened. I used two wire hooks to lower the wreath even further from the branch it hangs on. Now to get to it, Fat Enga has to carefully, gingerly climb down almost two feet of a skinny wire hook...

Which I watched her do a few times.

Finally, fed up, I threw a few peanuts on the nearby porch. I told myself they were for the blue jays, but I guess I secretly hoped Enga would see them and eat those instead of messing with the peanut wreath.

Then I watched as the blue jays took all those peanuts, one by one, in what seemed like a matter of minutes.

Enga is now on her own.

Or is she? I've seen a squirrel devouring the sunflower seeds I put in the back garden feeders. Could it be one and the same fat squirrel? I don't mind if Enga eats from those feeders as I mostly watch the birds in the front garden, where the good seed is.

The good seed has attracted cardinals, finches, chicadees, blue jays, woodpeckers, and at least one bluebird that I know of. Plus a few grackles and a mourning dove or two. It's been fun watching all these birds out the window as I sit at my desk and work on whatever it is I am working on. Some days an article, some days my book, some days mindless social media, and soon some presentations for upcoming speaking opportunities.

I can look up from whatever is on my screen at any anytime and see at least a few birds, and occasionally Enga.

I hope Enga is the only squirrel hanging around my garden. And I hope she stays in the back garden where there are two feeders full of sunflower seeds. Hopefully, she's eating that seed and has stopped digging up crocus corms.

Time and spring will tell.