Getting ready for... February!

January 29, 2017
I've heard some rumblings from a few people concerned about me getting bored as we begin to walk through that big valley of winter called February.

No worries. I'm all set. Ready to go. I've got plans. I've got seed catalogs and books. I've got little snowdrops I check on daily when I am out filling up the bird feeders, which I do on a near daily basis.

I've got ideas ping-ponging between my ears.

One of the ideas I had a few weeks ago was to sell my house and garden and move to a tiny garden in London. I would, of course, hope there was a comfortable house attached to it.

Where did I get such an idea? From reading Rhapsody in Green: A novelist, an Obsession, a Laughably Small Excuse for a Vegetable Garden by Charlotte Mendelson (2016).  It's funny. Mendelson gardens in, you guessed it, a tiny garden in London. She makes it sound quite appealing. She also admits, in writing, doing some of the same things other gardeners do, like obsessing over seeds and then once the seedlings are up and should be potted up or planted out, losing interest in them.

No gardener can truthfully deny that they haven't done the same thing. It happens. I've done it. I'm not proud, but I'm not alone.

I also read Lessons from Great Gardeners: Forty Gardening Icons and What They Teach Us by Matthew Biggs (2016). I got over being miffed that Elizabeth Lawrence wasn't included but I guess Biggs couldn't include everyone. I'm sure she was 41st on the list. Maybe she will be in volume 2? Will there be a volume 2?

Biggs listed the gardeners in order by age so I figured out that in all likelihood Gertrude Jekyll and Penelope Hobhouse, who were both included, probably never met because Hobhouse was only three years old when Jekyll died. I had no idea what time period Jekyll was from, because she's talked about still today. And she died in 1932.

I would like to have a timeline of garden writers so I can see who might have known whom. Now there's a February project!

One of the garden lessons from Jekyll is about having a quiet space of lawn unencumbered in the garden. That reminds me that I should take my lawn mower to the repair shop in February for a tune up and blade sharpening so it's ready when the time comes, sooner than we think.

February will fly by in just four weeks. And in those four weeks I plan to write three articles, all due in early March.  And be ready with three presentations, all to be given in March.  And work on marketing plans for my book, Potted and Pruned: Living a Gardening Life, which should be available in early March, too.

And I plan to read several more gardening books and finish watching all the Poirot episodes on Netflix. Watching Poirot solve mysteries makes me want to end all my sentences with French phrases like mon ami and n'est pas. I shall refrain from doing so as best I can, mon ami.

Instead, I will as Poirot often says "use the little gray cells" to keep my mind sharp.

See? There's plenty to do in February. I have no fear of February. I say bring it on and use it to come up with some great ideas for the garden! 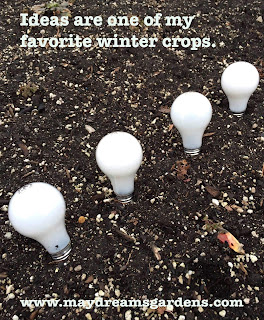