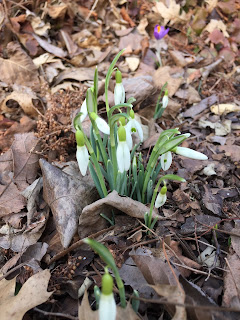 I'm still on the look out for a good chocolate cupcake with chocolate frosting, one that is good enough to spend the time, money, and calories on.

But alas, the garden calls with more warm days in February than I ever remember, and I am of the firm belief that one ought to answer any call from one's garden. Therefore, the idea of the cupcake is on hold for now.

Someone once told me snowdrops will multiply and spread out a bit if you move them around "in the green", presumably after the blooms have faded. I think I'll give it a try. I'll tag all of the various single snowdrops and little puddles of snowdrops here and there and dig them "in the green" and put them all together somewhere.  Maybe.

I'm going to leave all the crocuses alone. They are all over the place in the front borders and in the back lawn. 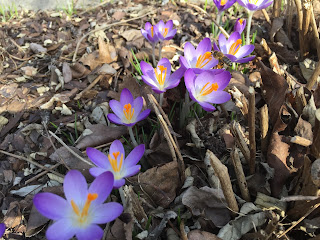 It would be nice if a garden called in late winter/early spring just to invite the gardener to stand around admiring all the crocuses. Ha!  My garden calls me to come out and cut back perennials and grasses and roses.

I cut back all the roses, mostly Knock-Out roses, to freshen them up a bit. And by cut back I mean I cut them back to about six inches. It's scary the first time you do that, but then when they grow back and are three feet tall again and look good again, you realize that it isn't scary at all. It's brave!

Be brave but wear thick gloves and long sleeves when you cut back roses. Otherwise, you will look like you got into a fight with the neighbor's cat who keeps coming around the bird feeders looking for a snack.

I am kidding. I know cats don't like bird seed, they like birds. Luckily, as far as I can tell the neighbor's cat hasn't successfully nabbed a bird. She's just gotten in my way while I was trying to take pictures of bees on crocuses.

So friendly, she was. And soft. But I'm not tempted to get my own cat. Or my own dog. I took care of a dog for a few days a few weeks ago. Everyone breathed a sigh of relief because the dog survived, and so did I.  Though, I'm not sure what the garden fairies thought about the dog and the remnants of her business meetings held in the back yard. Of course, I cleaned it all up as quick as I could because I didn't want the garden fairies to get the idea that dog-doo was going to be the norm in the garden and flee because of it.

The entire week is going to be warmer than usual so I'll keep working on the perennial border clean up—a bit each day until it's done—and then on to weeding and mulching.  I'll also keep admiring the crocuses, some of which are already starting to fade and be a bit past their prime!

And when I'm not in my garden? I'll be working on getting the word out about my new book, Potted and Pruned: Living a Gardening Life. It's not available for pre-order just yet, but we are getting close.

In the meantime, here's a sneak peek at a graphic from the book.

Snowdrops and birds, from a book I bought at a local used bookstore, The Garden's Story by George H. Ellwanger. (1889)
books bulbs spring