Dirty Knees and All is Well 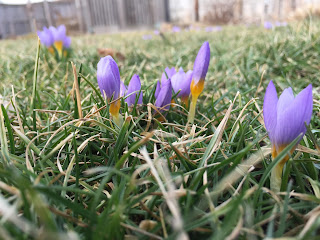 A few days ago, the crocuses were covered with about an inch of snow and winter was decidedly present in the garden.

Today, the snow has mostly melted except in the coldest parts of the garden and the crocuses are coming up faster than I can count them.

Count them?  I did attempt a count last year, early on, and quit at about 300. I know I've planted well more than that–perhaps 3,000 over the last several years–so I expect to see crocuses popping up for several more weeks.

Time to crack on with the early spring chores in the garden, don't you think?

I ventured out today when the temperature reached 47ºF  and began cutting back the switchgrasses, asters, and daisies, amongst several other perennials I left standing last fall. There isn't anything magical about that temperature by the way. It's just the temperature I noticed when I saw the sunshine and felt that old familiar pull from the garden, heard that song I've heard so often before. "Come out to the garden, Carol."

I almost convinced myself that I wouldn't get that dirty in the garden and therefore didn't really need to put on my old jeans. 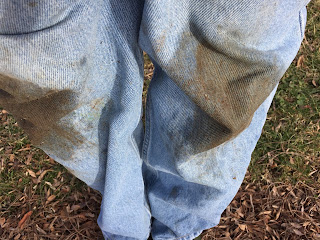 Fortunuately, I came to my senses and changed into an old pair of jeans. No restrictions now! I knelt down and commenced to cutting back what was left standing in the garden.

Did you know that after winter, most of those old stems will just break off with a little twist? It's not too tidy but it does speed things up to just snap them off. I do that, and then go back and give them a nice trim so there aren't jagged ends sticking up all over.  Then later, before the little shoots come up, I'll rake up the worst of the debris left behind.

This year, I think I'll also have time to add some more mulch to the perennial borders, mulch that is greatly needed.

I thoroughly enjoyed myself out in the garden. I got my knees dirty and thought once again how all is well in the world if you have a garden and you can kneel down and get your knees dirty, and then get back up again.

This winter isn't quite over yet, but the signs of spring are showing up, bloom by bloom, dirty knee by dirty knee.  I'm looking forward to all the new growing season has to offer and hope, as I always do, that this will be my best year yet in the garden.
bulbs gardening winter

Unknown said…
It is so good to hear the call of the garden loud and clear again! Spring is just around the corner, or so I keep trying to convince myself! Glad you are back out there, getting your knees dirty!
Sat Feb 11, 09:58:00 AM 2017