In the spring, I need to see every flower 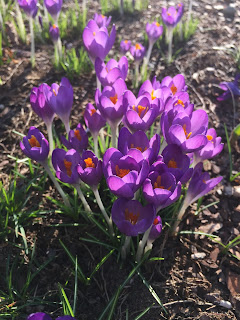 In the earliest spring days, which is really the last winter days, I need to see every flower. Yes, I feel like every flower that blooms needs a personal visit from me.

I need to see them all. I cringe at the thought that one of the many flowers that lies dormant in a bulb in the ground for almost a year since it last appeared should not be properly greeted when it blooms.

I worry that if I don't make an effort to see them all—take pictures of them, admire them, flatter them, and in general make a bit of a fuss over them—they'll get their feelings hurt and never return.

Or should that be "flowers have feelings".

I suppose the feelings are actually mine. I'm thrilled to see all the blooms. I run around the garden looking for them, taking pictures of them, and hoping that when I see them they've just opened up. I'm disappointed in myself if I see a bloom for the first time and it is already fading.

This spring, late winter, I'm nearly out of breath trying to keep up with all the flowers. I think they are early though my garden journal tells me at least some of them have shown up this early before. There are dozens of snowdrops and crocuses and the little irises. I've come to expect them to bloom early and actually do start looking for them in early February.

Then come the daffodils in March.

Apparently, daffodils don't see calendars and check off the days until they should bloom. They just know it's warm after it was cold so it must be time for the show, even if it is February.

The first of the daffodils opened a few days ago. 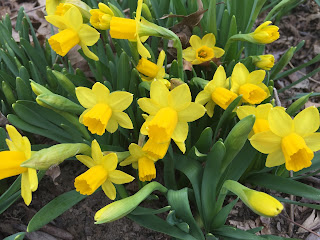 I know this daffodil is early. 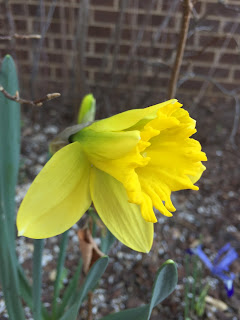 It looks a bit scrawny, too, like it had to dress in a hurry when it felt how warm the days have been and realized the show has started.  With all the warm weather, poor dear must have thought she was late.

If only I could have told her before she bloomed that there's more cold weather coming and she may not like it. I'd also like to tell the swelling leaf buds on the trees to hold off and don't open just yet. Really, I'd like to tell all the other spring blooms to slow up a bit. It's not their time yet.

But I'm merely the one with the camera who is running from bloom to bloom as fast as she can hoping to see them before they fade and tell them each, individually, how pretty and special they are to me.

And they still do as they please, and so far, they please to bloom early.