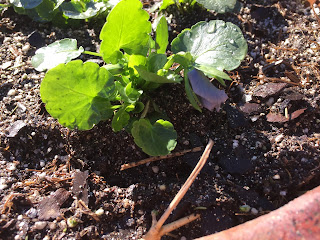 I'd been wanting one for days, thinking about it off and on whenever I either drove by a cupcake shop or was breathing.  Just one cupcake. It would be a treat. One.

Then I saw on Facebook that a local garden center had pansies for sale. On February 17th. This is unusual enough for our gardening zone that I took notice.

After all, if there are pansies available, I must have them.  But never before have I looked for them before March. In March, I used to cruise by garden centers looking for signs of life, for a few pansies out front. I wanted to always be the first gardener to have a container or two of them planted up in the spring.  I still do.

I'm "wired" to get the pansies in March, not February. But I can be re-wired. I can adapt.

The plot thickens. The garden center had them because the local greenhouse had some.

Well, after some back and forth online chatting with the greenhouse owner and a quick check of the long-range weather forecast to be sure we weren't being totally fooled by Mother Nature's gift of warmer-than-usual temps in February, I hopped in my SUV and went to the greenhouse.

When I pulled up, they were sitting out front on a break. Laughing. Enjoying the sunshine. Waiting for me to pull up.

We went back and checked out the pansies and violas.  Of course, the garden center people bought the flats with most of the flowers, but I had my pick of all the rest.  I picked 'Candy Mix' and bought two flats of them to take home. Two flats is what I call "a good start".

I've already planted them up. Two long boxes on the porch, one window box under the front window, one big container by the lamp post and one smaller container that probably should be moved because it is in a shady spot by the front door.

In another week or so, I'll go back and get some violas to put with them.

In the meantime, I can think again about getting that chocolate cupcake with chocolate frosting, or perhaps sea salt caramel frosting,  at least until the violas are ready to plant.
annuals spring

Lee@A Guide to Northeastern Gardening said…
You read my mind! I have had the bug too to get some pansies but the local garden center where I usually get them isn't even open yet. Just yesterday, I thought of taking a ride to see if I could find some elsewhere. This winter just feels so long and I cannot wait to get my hands in the soil again! Enjoy your blooms!
Sat Feb 18, 10:48:00 AM 2017

Lisa at Greenbow said…
You need those cupcakes so you can reward yourself for getting your pansies planted. This is a strange February. Lucky you to find pansies. I was just thinking about them today too. I haven't found any here.
Sat Feb 18, 12:25:00 PM 2017

RobinL said…
I always consider myself quite lucky to actually find pansies in March. But February? That's a garden miracle!

Denise said…
Now you have me wondering. Yesterday in the garden I pulled up a small leafy green plant thinking it was an early weed. Could it have been a pansy? Shoot. It certainly looked like it could have been one. I'll be more careful while we continue to have this unseasonable warm spell.
Mon Feb 20, 10:14:00 AM 2017

garden4dinner said…
Picking up some pansies sounds like an excellent idea! I will have to add that to my to do list. They are perennials where I live in the Pacific Northwest and I haven't planted them at my current house yet. Have you ever tried using them in meals? I know they are edible, but I haven't tried them.
Mon Feb 20, 01:57:00 PM 2017