The Man Who Grew Vegetable Marrows 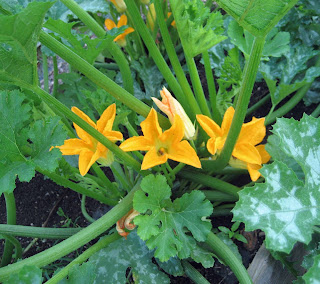 It would make a great Jeopardy game show clue.

"The Man Who Grew Vegetable Marrows".

The answer: "Who is Hercule Poirot?"

We might also accept the answer, "What is the title of Chapter 3 of The Murder of Roger Ackroyd by Agatha Christie?"

I've been watching "Poirot" on Netflix for several weeks and finally in season 7, episode 1, in The Murder of Roger Ackroyd,  the famous Belgian detective from countless Agatha Christie mysteries had just retired to a village called King's Abbott and taken up gardening.

I knew he would take up garden eventually. How could he not?

His neighbor finally meets him in Chapter 3 in the book...

"I saw the chance to escape into the garden. I am rather fond of gardening. I was busily exterminating dandelion roots when a shout of warning sounded from close by and a heavy body whizzed by my ears and fell at my feet with a repellent squelch. It was a vegetable marrow!

I looked up angrily. Over the wall, to my left, there appeared a face. An egg-shaped head, partially covered with suspiciously black hair, two immense moustaches, and a pair of watchful eyes. It was our mysterious neighbour, Mr Poirot.

He broke at once into fluent apologies.

'I demand of you a thousand pardons, monsieur. I am without defence. For some months now I cultivate the marrows. This morning suddenly I enrage myself with these marrows. I send them to promenade themselves - alas! not only mentally but physically. I seize the biggest. I hurl him over the wall. Monsieur, I am ashamed. I prostrate myself.'

Before such profuse apologies, my anger was forced to melt. After all, the wretched vegetable hadn't hit me. But I sincerely hoped that throwing large vegetables over walls was not our new friend's hobby. Such a habit could hardly endear him to us as a neighbour."

In the "Poirot" episode, this particular scene is slightly modified. In the adaption for television, Poirot goes on to express his frustration that the marrows he is growing don't grow all that big in spite of his efforts to provide water and fertilizer, remove all weeds (he removes them with tweezers he says) and eliminate all but one flower so all the energy goes to one marrow.

Yet still they don't don't grow as big as he'd like.  And that is his frustration

Yes, I also had to look up marrow. Marrows are mature zucchini squash. But in this episode, they use what looks like watermelon for the marrows. Poirot simply does not understand why his marrows don't grow larger, given the great care he takes in growing them. He gets so frustrated that he chucks one over the garden wall.

Dr. Hortfreud took great interest in this scene, as did I.  She thinks many gardeners are frustrated in their gardens, frustrated enough to throw vegetables, no doubt. She said that if she, who shares her fictionality with Poirot, were to talk to him, she would tell him that the results he is getting have nothing to do with his methods, though weeding with tweezers seems a bit extreme. She would calmly explain to him that he probably isn't growing the right variety of marrows. He needs a variety that grows bigger.

After all, the variety of a vegetable or a flower can make all the difference between success and failure, between feeling satisfied and feeling frustrated. A good lesson to consider on a winter's day, while watching a Belgian detective who has solved so many murder mysteries, yet doesn't seem to know that variety matters.

Well, as I said, if Dr. Hortfreud could just meet up with Mr. Poirot once in his garden, she could set him straight and help him choose the right varieties to grow big marrows.