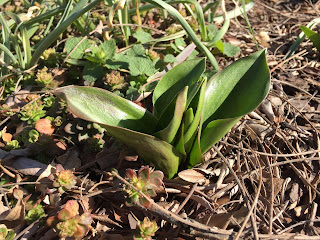 I went out to the garden today and walked around a bit, shivering on what is hopefully the last really cold day of early spring.

Thankfully, the sun was shining or that 39º  Fahrenheit would have felt a lot colder than it really was.

I saw a lot of weeds coming up, along with the foliage of many flowers yet to bloom.

Out under the honeylocust tree, I found the distinctly mottled leaves of the Trout Lilies,
Erythronium 'Pagoda', a hybrid between two native American species, E. tuolumense x E. revolutum.

Though strictly speaking 'Pagoda' is not a wildflower, I offer it today for Wildflower Wednesday as a nice naturalizing plant for a woodland garden. I can see even in the small area where I planted mine two years ago that they are beginning to spread a bit, which is exactly what I want them to do.

As I recall, the foliage will hang around for a bit after the blooms fade, unlike some spring ephemerals which disappear quickly. I don't cut back the foliage. Instead, I let it die back naturally.

I will deadhead the blooms, though. As a hybrid, 'Pagoda's seed offspring won't be 'Pagoda' at all so there is no reason to encourge them to produce seeds. I'd rather all the plant's energy go toward producing little baby bulb offsets, technically called bulbils, which is how it spreads itself around.

The yellow flowers should show up in a few weeks, if not sooner. Last year, these trout lilies were in bloom on April 15th. This year, with so many flowers blooming a bit earlier than usual, I may see them sooner than that.

Now go over to Clay and Limestone to see what Gail is offerering on Wildflower Wednesday!

If you haven't been to my blog in awhile, you probably noticed I changed it up, quite a bit! Feel free to email me or leave a comment if you have any feedback on the new blog "digs".