What a gardener's DNA test reveals 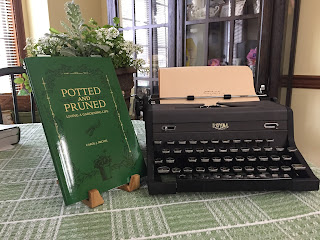 How many of you faithful readers have sent off for a DNA test to find out where your ancestors came from and who you might be related to?

I sent off my saliva for a DNA test about six months ago and nearly forgot about it until an email popped up with my results.

Most of what they reported was about what I expected. As I reviewed the details, though, I saw at the bottom there was a note asking me to call a special number to get additional information.

I forgot about the note until a few days ago when I was looking at my DNA results again. I decided to call the number.

A woman answered and after verifying my identity, she asked me if I was a gardener.

"Well, yes, as a matter of fact, most people would say I'm a gardener."

"We thought so", said the lady.

"We saw it in your DNA. In fact, we've noticed something unusual in a few other people's DNA and did some further analysis to figure out what was going on."

"And what is going on?" I said, now skeptical about the whole thing and thinking this was some kind of scam.

I almost hung up before she said, "We've noticed that in a tiny segment of the population they actually have plant DNA mixed in with their own DNA. We knew it was plant DNA but we couldn't figure out why we were seeing it in some people's results and not others. Then it occurred to us. These must be gardeners. So we added the phone number to their reports and asked them to call. We are confirming they are all gardeners."

"So you mean gardeners are born, not made?"

"Well, that's what we think. Or at least some are born, and you are one of them."

We talked a bit more—it turns out she has plant DNA in her DNA, too, so naturally we talked about gardening—and she asked if I would agree to participate in a more complete study. Since I know many people wonder if gardeners are born or made, I readily agreed.

I believe the study will last a year and we'll get the results next April Fool's Day.  Until then, I'm going to assume, as I always have, that even though some people seem to be born with a trowel in their hand, anyone can and should become a gardener.

Oh, shoot, I forgot to ask her what plant's DNA was in mine. I truly hope it was violets and not dandelions.

Lea said…
Weren't you just singing the praises of Dandelions a few days ago? Established a Dandelion Society, and now you would rather be a Violet?
Oh well, gardeners do get a little crazy in the Spring.
Sat Apr 01, 02:45:00 AM 2017

Kathy said…
Looking forward to the results of the long-term study. I'm afraid it would discourage some people to think heredity was involved. On the other hand, it might explain why some people live and breathe gardening and others are content with foundation shrubs and paying someone to mow the lawn.
Sat Apr 01, 10:30:00 AM 2017

Lee@A Guide to Northeastern Gardening said…
Great April Fool's post! I knew there was something different about us gardeners!
Sun Apr 02, 06:15:00 PM 2017