I am auditioning new mulches for my garden 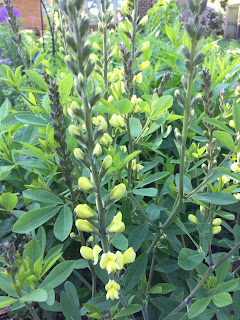 I did a little bit of mulch/flower shopping on Wednesday, which we now refer to as "the last day between the rains".

We got a whole bunch of rain on Saturday and Sunday, and possibly Monday. I was out of town on Monday so I'm not sure if we got rain or not since I didn't really check my rain gauges that closely when I got home.

Back to the "little bit of mulch/flower shopping". That little bit included about, well not about, but exactly five new Baptisias.  Oh yes, I know where I am putting them.

I also purchased three Epimediums, and I know where I am putting them.  Plus six 'Rozanne' geraniums, and I have a couple of spots in mind for them. Add three Butterfly Flowers, as we like to call Asclepias tuberosa these days instead of Buttefly Weed because who wants to buy something called anything weed for their garden? I know where I am planting them, too.

I also bought a new clematis, 'Betty Corning', and I know where it's going, too.  Don't I sound all smug with my purchases which also included three hollyhocks, two geums, and three lupines? I think I know where I am planting all of those flowers, too.

I like to refer to these perennials as "a good start".  I intended to plant them all before the rain arrived, but the rain arrived earlier than I had planned for it to arrive and hasn't left yet.  You know, like a houseguest who shows up early and stays too long. But you hate to complain because that would be rude, whether it is rain or houseguests.

But this post isn't really about all the plants. And it isn't about the rain. Rain can be such a tiresome, dreary subject, can't it?

It's about mulch. Along the way as I filled my carts with flowers at several local places, I picked up a couple of bags of mulch to audition them for the garden.

I'm casting for the lead mulch role for the back gardens, primarily. The role calls for a mulch that will nourish the soil as it decomposes and will look good while doing so. I would also like it to keep down the weeds, though I have no expectations that any mulch will keep out every weed.

I am planning to use my usual mulch, a pine bark mulch, for the front gardens. The mulch in the back gardens will also be a pine bark based mulch, but more finely shredded than what I use in front.  However, I am open to using a new mulch in the front as well, if the audition goes well and I find a good lead mulch in one of the bags I picked up while mulch/flower shopping.

Please note this is a "by invitation only" mulch audition, not an open casting call. I've already weeded out unsuitable mulches including those that have been dyed (yuck) and those not made out of a sustainable by-product.  Oh, and no rocks, lava or otherwise. Rocks are loose paving, not mulch. Rubber mulch has also not been considered for obvious reasons.

Unfortunately, the rain has postponed both the mulch audition and the planting of all the new perennials. What? You think I wouldn't have gotten those perennials all planted if it hadn't rained?  Ha!  I've reformed, you know, and I most definitely, assuredly, and without question woulld have planted every single one of them by now.

And I will plant them all, and finish the mulch auditions, as soon as it stops raining and dries out just a little bit.

Lisa at Greenbow said…
This is one heck of a rainy spell. First it is drought-like then the heavens open. What a wash. Your selection of plants sound great. They will like the moistened soil when you plant them. It would be interesting to me to hear how the shredded pine bark holds up. I know well that nothing keeps weeds out forever.
Fri May 05, 09:48:00 AM 2017

outlawgardener said…
I'm impressed with the fact that you know where all of your new purchases will be planted but we're not holding our breath about your reformation. Looking forward to hearing about the winner of your mulch auditions.
Fri May 05, 10:00:00 AM 2017

Anonymous said…
Have you considered mowed-over/shredded leaves for mulch ? You can collect bags of leaves from neighbors next fall to add to your own, shred them and by spring it will be leaf mold, a natural dark brown that will be good for the soil, worms and plants. Free, and natural!
Fri May 05, 11:02:00 AM 2017

Margo said…
My favorite mulch is pecan shell mulch. I can get it here in Texas pretty easily. The color is usually dark brown. Not only is it pretty but the color last much longer than my next favorite mulch, Texas hardwood. It doesn't float away like cedar mulch does and it's easy to work with (light weight). It takes longer to break down which is both an advantage (don't have to apply as often) and a disadvantage (probably doesn't feed the soil as much as hardwood - but that doesn't seem to be a big issue). The only thing I don't like is that you don't want to walk on it with your bare feet because of the sharp edges.
Fri May 05, 02:50:00 PM 2017

Ali said…
Anxious to hear what you decide on. I only realized the potential importance of mulch when I started to transition from Square Foot-style gardening to a more free form type of planting. I'm still not sure what I'll end up using.
Fri May 05, 05:05:00 PM 2017

RobinL said…
Hmmm, I never thought of audtioning new mulches. I just flounder about and hope for the next. Last year I found a medium shred pine bark that smelled and looked good, but it is a bit fluffy and floated down into the crevices left by hubby cutting out the edges each spring. It was easy to apply, but tended to disappear. But hubby loves it, and we will try it again. He managed to rescue much of it in the process of cutting out edges again this year. For a few years, we were purchasing basic brown shredded mulch from the boy scouts because they delivered it, and we don't have any appropriate vehicle for such a thing. But it wasn't a very good quality. So we paid Ohio mulch to deliver the medium pine bark. We really do need at least one vehicle capable of carrying about gardening items!
Fri May 05, 09:09:00 PM 2017

Hoover Boo said…
When you don't get enough rain, and it finally arrives--it's not dreary at all! Wish we could trade some endless sunny days for a little more of your rain.

Krystal Morrison said…
Their onerous days work was in direct contact with the soil and therefore the fruit of their labors was the fundamental building blocks of life. As kids weekday round the table and gazed on a home boiled meal, they saw the potatoes, carrots, yams and tomatoes that they'd planted, rigorously nourished and harvested.
Mon May 08, 01:09:00 PM 2017

Basil Becky said…
I have so many areas to mulch that I have tried to become very creative. My husband does his one job in the garden and mulches up all the leaves and puts them in a big big pile in the back lot. Since we have a lot of big trees this becomes a very large pile or several large piles. I have begun using the leaves after they have rested a year or so as mulch in my wildflower garden and cottage garden and a few other places. It looks great and will happily decompose in my garden adding nourishment. That at least is the plan. We will see.

Stacy@MutinyintheGarden said…
Ugh this rain. We got 6" and then 4 " and then every day in between more inches! So.sick.of.Rain.

My vote for favorite mulch is cocoa bean. It mats up so it doesnt float away. It has a bit of nitrogen in it and it is super light to carry around. Its to expensive to use by the acre but for pots to prevent splashing and under the lettuce and tomatoes its fantastic. It is not, however suitable for any place with dogs.
Tue May 09, 08:22:00 PM 2017

Tina Martino said…
I'm curious to see who wins your mulch auditions! I love putting fruit, veggies, peels, leaves, even newspapers and other goodies together to create my own mulch!
Sat May 13, 10:57:00 PM 2017

Gene said…
I've been using pine straw for the last 15 years. I pick it up curbside before the compost garbage trucks get to it. It never floats away, doesn't form a mat when dry that repels water, and is slightly acidic. It slowly degrades and I like the way it looks.
Sat May 20, 09:47:00 PM 2017