Sailing through the garden on the good ship 'Rain Again' 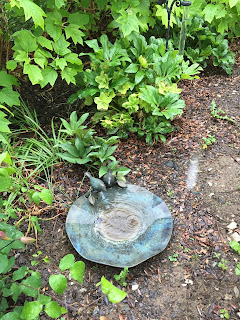 We've had quite the journey through Spring so far. We've sailed along with six or more inches of rain in the last ten days or so, depending on which rain gauge you believe. My garden is thoroughly and unequivocably saturated from it all.

The cruise director on the good ship 'Rain Again' has kept me busy, more or less, while we've been out to sea. I've been using the time between the ports 'Partly Sunny' and 'Partly Cloudy' to write a few articles due in the next couple of days.

I've been dry docked in the past in a hellish place called 'Record Setting Drought' where we gardeners had little we could do expect wring our hands, gnash our teeth, and pray for rain. After that experience, which was hopefully a once in a lifetime experience, I won't complain again about sailing on 'Rain Again'.

I'd far rather be out to sea on 'Rain Again' than docked at 'Record Setting Drought' any day of the week.

Yesterday we dropped anchor at 'Frosty Morning' which was quite a surprise to those passengers who had already planted their tomatoes and peppers.  We seasoned travelers knew better than to plant this early in May. The winds can shift after a few warm days and then the captain seems to reverse course too sharply and runs right into 'Frosty Morning'.

Fortunately we don't usually stay there long or go there later in May, though there was that one spring. Was it '97 or '98? That year the captain pulled a fast one on us and we docked at 'Frosty Morning' on May 25th.  Even I didn't see that day coming and lost all my peppers and tomatoes to the frost and had to replant.

Anyway, looks like we've docked at 'Partly Sunny' now so I'm going to go up to the main ship deck of this good ship 'Rain Again' and check the skies. If it looks clear out to the west, I think I'll get off at this port and stay as long as I can.

Safe travels to you as you sail on your own ship through the choppy waters of Spring,

P.S. We've docked several times at 'Go Ahead Buy Some Plants', so I've got a lot of plants to get into the ground before we set sail again on 'Rain Again', which could be as early as tomorrow morning.