Anticipation, Thy Name is Green Tomato 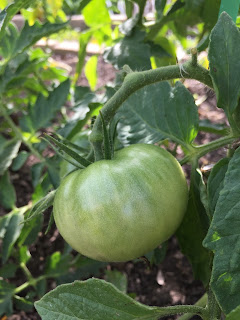 My vegetable garden is full of anticipation right now.

The green beans are flowering and so are the squash plants.  The corn stalks are more than knee high which is good because around here we like to say "knee high by the 4th of July" about our corn, even though most field corn is shoulder high by now.

The zinnias are budding up nicely and so are the marigolds. I hope I get as good a display of those this year as I did last year.

I do wish my cucumber plants were further along and wonder why the okra plants are so small.  It's funny, one row of okra seems normal size and then a foot away from it, another row is half the size. And a foot away from it there are some cabbages growing. I wonder if okra doesn't like to grow by cabbage?  I'll have to look that up some day.

I am pleased, though, with the peppers, especially after the poor performance of the peppers last summer. They were awful. This year, they actually have some of the first peppers ready for me to pick. You know, those first small ones that you really ought to pick so the plant knows you mean business, that you aren't going to be satisified with one puny pepper so it had better get busy blooming some more and making more peppers, bigger peppers. In other words, fulfilling its life's mission of producing seed bearing fruit and lots of it.

But all those pepper plants are forgotten when I look down the row of tomato plants and see all the green tomatoes. All I can think of now is how good those tomatoes are going to taste.

The other day I went down the row of tomatoes and clipped off the suckers and tied the growing plants up all nice and pretty. Of course I stake my tomatoes. I might be lazy but I'd be ashamed to be so lazy as to just cage my tomatoes.

I checked for signs of disease and stared at the plants to see if I could find a tomato hornworm. Negatory on both. The tomato plants are looking good heading into the 4th of July holiday.

I wonder which tomato will be the first to turn red, and be crowned the Queen of the Garden and have its picture splashed all across social media.

Will it be one of my beloved 'German Johnson' tomatoes?

I think it might be because I cheated just a little bit and bought bigger 'German Johnson' tomato plants this spring, so they have a bit of a head start over the other tomatoes. Cheating is a slippery slope, isn't it? Now that I'm heading down that slope, I might end up disqualifying any other tomato that turns red (or yellow as is the case with 'Yellow Boy' tomatoes) before the 'German Johnson' tomato so that it will be the first tomato of summer, the Queen of the Garden, the holder of the essence of summertime eating.

So yes, I would put my money on the 'German Johnson' tomato being the first to officially turn red without being disqualified. Its prize will be that I will eat it on a big plate of summertime.

Wow, just imagine a plate of summertime.  Big slices of 'German Johnson' tomatoes, fresh green beans cooked with new red potatoes and a bit of bacon and onion, and throw on a side of fried eggplant. My friends, that is the dinner of my dreams.

And dreams come true—my book is proof of that—so I'll be eating that dinner later this summer. Oh yes, I will.