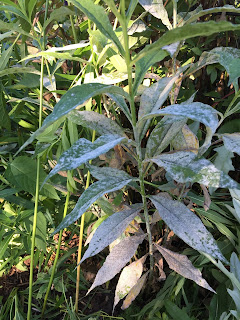 If you've got garden troubles, pull up a chair, grab a tall glass of iced tea and let me tell you all about my troubles and then you can tell me all about yours.

First of all, I was doing some deadheading and weeding in Plopper's Field, my perennial border where I just plop plants in wherever there is a blank spot and hope for the best.

I pulled a weed out of the way of this phlox and jumped back like I'd seen a snake or something. Can you believe that much powdery mildew can live on one plant? That's the worst I've ever seen this early in the season.

But that ain't nothing.

I've got voles. Of course, by the time I noticed that I had voles in my garden, there were vole runs everywhere. In Plopper's Field. In The Garden of Southern Follies and Delights. In Bird's Blanket. Along the house by the Lilac Muddle.  And that's just what I've found so far.

I did wonder why this one stand of wild ginger was all kaput and three feet away the wild ginger looks great. I guess the voles ate the roots of the one patch and haven't found the other one yet.

They are partying in my garden like it is 1999.

I've looked online for how to get rid of the voles and several sites suggest I get a cat. Well, I've seen the neighbor's cat in my garden plenty of times and I still have voles so I think I'm going to... trap to kill.

It's the only way.

I won't poison the voles because then if a hawk eats the poisoned vole, it will also be eating the poison and that won't be good.

One winter I accidentally killed a vole with my snowblower while clearing off the driveway, but I don't think I can use that method in the summertime.

What other garden troubles have I got?

It has stopped raining. And the high temperatures are predicted to be in the 90's next week. Too hot, too soon and that will surely be the end of the lettuce crop. I'm going to have to start watering in The Vegetable Garden Cathedral.

And of course the weeds. The weeds are trouble. They got off to a great start with all the spring rains and haven't look back once to see if I'm chasing after them with a hoe. I guess that means I can sneak up on them and get 'em when they aren't looking, if I can run as fast as they are growing. I did whack back a bunch of bad weeds in the paths in The Vegetable Garden Cathedral. Now I just need to cover those paths, which is the plan for next week.

And on it goes.

But in spite of my garden troubles, and I've got a lot of them, I'll never give up on my garden or gardening.  And neither should you.

Leanne Conrad said…
I just got rid of my vole problem, but not before it ate about twenty plants! I tried organic pellets that were supposed to make the voles go away, but it didn't work. Earlier this week the vole wandered a little to close to one of my beagles (underground of course) and that was all it took. I came out to water and the dog had left it laying at the garden gate, like a present for me. If I lived closer I would bring the beagles over to your garden.
Sat Jun 10, 07:19:00 AM 2017

Lisa at Greenbow said…
Yes, I would like to have a discussion with whom ever turned off the rain so early in the year. Bah humbug. As to garden pests a chipmunk has taken up residence here. The voles are vieing for the same runs as the chipmunk. UGH...
Sat Jun 10, 07:39:00 AM 2017

Penny said…
hah i can beat that.. i have chipmunks, voles, rabbits and saw a woodchuck a month ago (i hope he was just passing through) i also have a labrador retriever.. so the dog doesn't work.. i am at my wits end. i have chicken wire cages that i made to go around many precious plants.. that works on rabbits but nothing else .. i have trapped a few chipmunks but i can't find anything that works on the voles i have heard muse traps work great.. that is next looking forward to seeing if you find a solution

Hetty said…
Is that all Carol? I got a storm running though my garden. Windforce 9! Just a few days before the first garden visitors are coming. I am glad to share this with you. Makes me feel better . Groetjes,
Hetty
Sat Jun 10, 08:22:00 AM 2017

Denise said…
I've been told by two experts that voles do not eat roots, they just destroy them by digging. My large hostas look like minis so I really don't care how they killed the roots, tell me how to kill them. I have had no luck with mouse traps.
Sat Jun 10, 11:04:00 AM 2017

Kylee Baumle said…
Yeah? Well, I got my lettuce and spinach seeds in late because of all the early cold and then torrential rains we got up our way and they're just now nearing cutting size and we're to be in the 90s. ACK.

And that mildew? I have an Itoh peony that looks exactly like that. I've NEVER had mildew on that peony ever before. It looks so garishly glaucous. Yeah, glaucous. That's it. From a distance, everyone will think I've got a wonderful new cultivar...
Sat Jun 10, 11:52:00 AM 2017

www.thenorthernwestvirginiagardener.blogspot.com said…
So what do you do to get rid of the mildew? From all that moisture, I figure. I thought I'd be over run with slugs, but there don't seem to be that many - or something is enjoying them as an appetizer like escargot....
~Ann