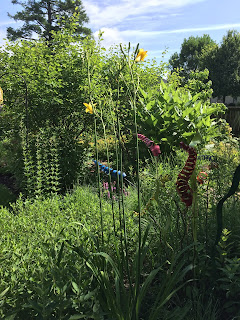 If you were going to make a basktball team out of daylilies, 'Notify Ground Crew', with flower stems hovering just over six feet tall, would be a strong contender for the center position.

For my non-sporting friends, in basketball the person who plays the center position is usually the tallest person on the team.

After picking 'Notify Ground Crew' at the center position, I have no idea which daylilies to choose for the rest of the team. Most other daylilies top out around three to four feet.

I guess I could pick some other plants to add to the team, like the cup flower just behind and to the right of the tall daylily in the picture. But since this is Team Daylily that just doesn't seem right.

But then again, some readers might think it isn't right in the first place to imagine daylilies on basketball teams.

Well, to those readers, I ask what other way would you imagine such a tall daylily?