Garden Fairies: We have expectations 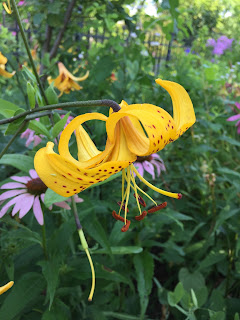 We are garden fairies and we are once again compelled, yes, compelled, to write a blog post.

You all know what this means, don't you?

It means Carol is either too lazy to write her own blog post, or she should be writing something else but instead lets us take over the keyboard, or she should be outside weeding and deadheading and mulching but instead she's watching while we garden fairies once again do all the heavy lifting.

That's right. The heavy lifting. The writing, the opening of flowers, the ripening of tomatoes. It is all us garden fairies and let us tell you that it is quite a lot of work never forget and we are garden fairies which means we don't like to do that much work.

However, we can match Carol minute for minute, hour for hour out in the garden. Except when it comes to mowing. That's all Carol. We want no part of the mowing and in fact it sends us scurrying to the far corners of the garden when she gets out there with the mower. The mower she named Forrest.

Of course, she mows off half the clover flowers with the mower she named Forrest which sends SweetPea MorningGlory into a tither and then some. Sweetpea knows it is going to take a day at least for the clover flower fairies to remake those blooms and fill them with the sweetness that attracts the bees.  But they are happy to do it and said it works out okay because a lot of the flowers Carol mows off with the mower she named Forrest are half brown and ready to be cut off anyway.

Harrumph. We think they say that just to be nice.

Did we mention the six bags of mulch still on the patio? We are garden fairies and there was no end to the anticipation and excitement when Carol showed up with 15 bags of mulch. She worked pretty steady for the better part of at least a day spreading nine bags of mulch and where she spread it, it looked quite nice.

Submitted by:
Violet GreenPea MayDreams, Chief Scribe for the garden fairies at May Dreams Gardens.

P.S. Carol tricked us into writing this post to avoid those six bags of mulch. We just know she did.
fairies humor

Anonymous said…
Dear Miss Violet GreenPea
Please write a book for children about your adventures in Carol's garden. Grown ups would love this too.
Affectionately
Miss Fran
Wed Jul 05, 10:41:00 AM 2017