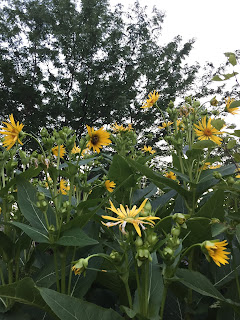 Our camp counselor told us that we should write home from Camp Garden-A-Lot so that is what I am doing.

I'm not sure how you chose this place, but you should know that we have taken to calling it other names like Not-Weeded-Much on account of the weeds all over the place.

Some of the campers like to call it "Moles-In-Control" because it seems like all summer there has been a mole running around here and no one seems to be able to trap it.

Finally, I took matters into my own hands and put some poison worms in one of the active mole runs and re-set the trap there, too. At least I think it is an active run. We'll see. If I end up killing the mole by either trapping it or poisoning it, I bet I get to be Camp Garden-A-Lot Camper of the Week.

Of course, Camper of the Week doesn't mean much except I think I get some kind of trophy. I just hope it isn't the dead mole stuffed and mounted on a board.  By the way, if you know of another way to kill that mole off dead, please write back and tell me.

Sometimes we call this camp "Raining-Again" because it seems like it rains a lot here. The other day it rained all day and we campers had to stay indoors. You would have thought we would have done something useful with our time, like sort plant labels or make something with all the zucchini squash we picked, but we mostly just sat around and looked out the window and read a bit.

Speaking of squash, we sure do eat good at Camp Garden-A-Lot, as long as we are willing to pick our food. Tomatoes, green beans, cucumbers, squash, onions, kale, eggplant, Swiss chard... it's all there for us to pick and eat to our stomach's content.  Oh and peppers. There are lots of both hot and mild peppers.

Pretty soon there might be a few ears of corn, too. The counselors promised we would do something special when the corn was ready to pick. I hope by special, they don't mean watch the raccoons eat it. We did that one year and that is not nearly as fun as eating the sweet corn ourselves.

Our counselor said that tomorrow is going to be hot so we campers are getting up early, about sunrise, so we can pick green beans and maybe actually weed a bit before it gets too hot. Yes, I will be sure to put on extra suntan lotion.

What else is going on at this gardening camp?

Well, not much, truthfully.

At night we like to watch the fireflies lighting up the garden. They say if you look directly at a firefly's light, just past it you will see a garden fairy. I've been trying it every night but haven't seen a garden fairy yet. I did, however, feel a tickle on my toe after I went to bed. I hope that was a garden fairy and not a spider.

Oh, and I almost forgot. I have special responsibilities to fill the bird feeders here and let me tell you, I have to fill them every day, especially the peanut feeder. If I don't those big ol' bluejays give me the stink eye until I do. Trust me, you don't want to get on the wrong side of bluejays.

It sounds like I don't like Camp Garden-A-Lot but honestly, I do like it. I like it quite a lot even when the only recreational activity is mowing the lawn. That sure is fun, especially when it is hot out.    Which reminds me. Can you send me a new string trimmer? The one here keeps jamming and not letting out new string so I had to stop trimming. I just mow now. But it would be nicer if I could also trim and it might get me another camper award if I did.

Well, the camp counselor has reminded us again that we are getting up early, early, early to beat the heat so I better close this letter. Besides, I want to finish reading a book I'm reading about plants and pollinators. No, it is not that risque', I promise.

Write when you can and please send some clean green t-shirts. All this heat is causing me to sweat through the ones I brought with me.

P.S. They call that flower I included a picture of "cup flower". Water collects in the leaf axils and animals drink that water, I guess.

P.S.S. Don't pick me up until after the killing frost. I think I'm paid up until then and I'm having a good time.  XO