Eulogy for a Tree 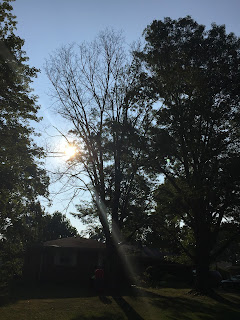 The other day, my sister, who lives with her family in the house we all grew up in, sent out a text to let us know a crew was cutting down the maple tree in the front yard the next morning.

Without hesitation, I changed all my plans for the day so I could be present for the last moments of this once grand and glorious tree that we grew up with.

My Dad planted this tree, and many others, when we first moved there when I was a toddler.  I assume I was there for the planting, perhaps playing nearby or maybe watching from a window.

I thought it fitting, therefore, that I was there during its final hours.

The tree was healthy until this spring, when it wasn't healthy. Maple wilt? Verticillium wilt? We don't really know but the few leaves the tree did manage to produce were one-third the size they should have been.

I remember when we were kids this maple tree had a tiny horizontal crack at just about eye level. You could stand there and watch as the crack opened and closed on windy days. Not wanting to lose the tree, my Dad got a long narrow steel plate from the neighbor across the street, who happened to be a welder, and screwed it to the tree to hold it together. Over time, the bark grew around the plate and unless you were there when it was screwed to the tree, you wouldn't know it was there.

We reminded each other for years to make sure whoever owned the house knew there was a six foot long steel plate somewhere in that tree, just in case the tree ever died and needed to be cut down.

That day finally, regretfully came, and so we told the guy they hired to take down the tree that there was a steel plate somewhere in there.

I watched as the tree guy took his time carefully climbing up the tree. One by one, he deliberately chose and cut off each upper limb. As each limb crashed to the ground, another guy stood by, waiting to drag it to the chipper.

After several hours of working in tandem—climbing, cutting, dragging, chipping—they were finally ready to cut down the main trunk. They cut on one side and then the other. We stood a safe distance away and watched to see if they would find the steel plate. Yes, they found it and though it did mess up a few saw tips on one of their chain saws, we were happy it didn't cause any kickback of the saw.

They continued to cut around the trunk but the tree stood firm, presumably held in place by that steel plate. Finally, they took the rope that was looped around the tree and attached it to a truck.  The tree was no match for the truck and with a loud crack, it finally fell down.

And there it was, that steel plate that held the tree together for so many years. 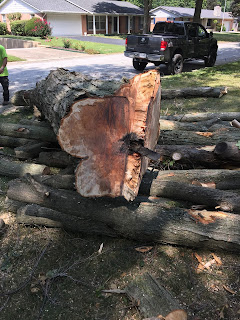 It held it in place as long as it could.

Now that the tree is down, we all want some of the wood from it for a keepsake, a reminder of a tree that saw over 50 years of our family's life. I resisted the urge of asking them to take the load of wood chips to my house to use as mulch in my garden, but I did collect some seeds from one of the few limbs with leaves and seeds on it. I don't know if the seeds are mature enough to germinate, but I'll try a few and see what happens.

We probably collectively over three generations— my Dad, me and my siblings, and later my sister's kids—raked millions of leaves from that old maple. Unlike the oak tree nearby which stubbornly holds its leaves until the spring, the old maple tree dropped thousands of brightly colored leaves every fall for us to rake up.  I'm sure my sister and her family will miss them this fall.

Now my sister wants to know what they should plant to replace the old maple tree.

Replace the tree? You don't replace a tree that has graced a front lawn for over 55 years. But maybe we can figure out some other trees and shrubs to plant in its honor.