Pollinators! On Flowers! Trust me! 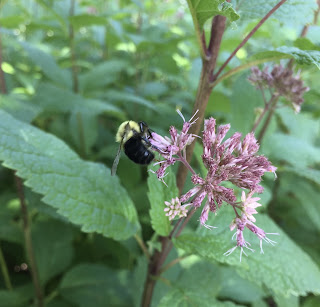 As summer nears its theoretical end, I think it is easier to find pollinators on flowers and take their pictures.

The bees seem fatter and lazier after a summertime spent eating a steady diet of nectar and aren't quite as quick on the take off when I approach whatever flower they happen to be feasting on.

Even butterflies, if they are happy with the particular flower they've chosen that moment, seem reluctant to flutter off when they see my shadow and camera coming toward them.

But still one must sometimes use one's imagination to see the bees and butterflies in the pictures I recently took around my garden.

There was a bee and a butterfly sharing the same marigold flower. I thought that was nice, how they were getting along and sharing and grabbed my phone to take their picture. 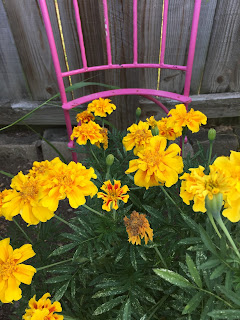 But I guess it's true. Two's company, but three's a crowd because as soon as I showed up, they left.
I promise they were there, on that one flower. 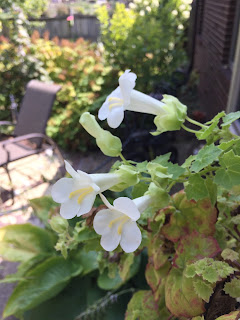 Then the fly off so I'm left with "this is where the hummingbird was" for a photo caption.

I do love zinnias and all the bees that visit them. I promise that right before I took this picture of my zinnias, there were at least five bees enjoying them. 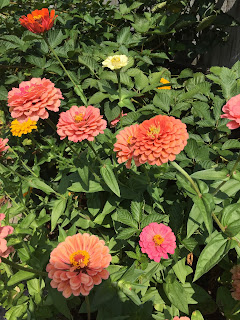 I can sure clear a garden, can't I?

But wait! I can offer proof that at one time a pollinator or two did visit at least one flower in my garden. 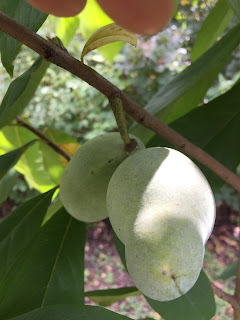 How else would I get pawpaw fruit from flowers that only like the pollen from another pawpaw tree on the other side of the garden?

Yes, pollinators are in my garden, even if I don't have pictures to prove it.